The wait is finally over; months and months of speculation, Nerf have released their new 2010 flagship blaster- the Nerf N-Strike Stampede ECS. Surprisingly, Australia hasn't been left that far behind compared to the rest of the world as with other Nerf blasters; 9-9-10 was the official launch date and there were those down under who actually got them in time. For me personally, my wishing and hoping for a Stampede must have been heard in spades, and I ended up with not just one, but two of them:) And to be honest, yes... the Stampede DOES live up to its hype:)


You've no doubt already familiarised yourself with all of the rumours and hype that lead up to this moment, so I figure we'll just get right into it:)
The first impression of the Stampede is it's very impressive..package;P The Stampede's box is HUGE; it definitely takes the cake for the biggest Nerf blaster box I've seen (even against the Vulcan EBF-25). It's quite slim though, which makes it very satisfying to walk out of a toystore with it under your arm:) 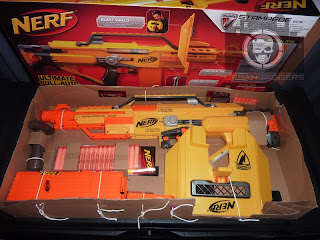 It is a very generous kit inside with many accessories- you not only get the Stampede ECS, but also three of the new 18 round clips, one traditional 6 round clip (not sure WHY they bothered with this, but I'm not complaining), enough streamline darts to fill the clips, a collapsible spring-loaded bi-pod and the tactical shield. Basically, you're getting everything you need for total foam automatic onslaught.. other than the batteries. Which is kinda important, because without 6 D cell compatible batteries, you're not going to be shooting anything in a hurry; the Stampede is fully automatic and reliant on a power source and unlike the Vulcan, there is no manual priming of the blaster. Reiterating this point- make sure you remember the batteries:) 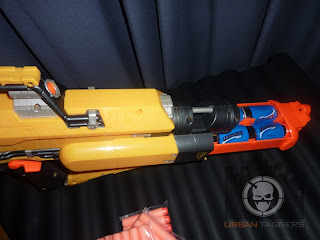 The battery compartment sits at the back of the Stampede and is secured by phillips head screws. Once the batteries are loaded, you very quickly realise that you're giving the Stampede quite a bit more weight; I find it isn't that much of a problem and feels nicely balanced but maybe because it's a more traditional appearance but it does seem to feel heavier than the Vulcan. The fact the Stampede is fully automatic does mean you can dual wield them but if you're planning to do this for long periods of time, you may want to consider using D-cell battery adaptors to reduce the weight. 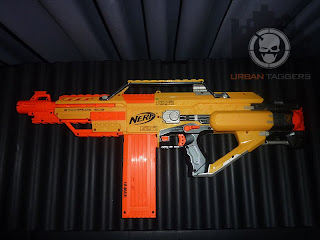 The Stampede ECS fires an impressive 3 rounds a second, which sort of makes you wonder why you'd bother with a traditional 6 round clip. The blaster does not operate without a clip inserted; once you've loaded a clip though, it's simply a matter of switching the "safety"on (ie the power switch above the trigger on the left side of the blaster) A quick squeeze of the trigger gives you a single shot, but pull it back completely and watch the foam fly; it really is quite a lot of fun:) The Stampede's ranges and power are very impressive, but being a clip system based blaster it can only take streamline darts, which aren't considered the best for accuracy and distance. If I was nitpicking, that would probably be the only strike against the Stampede head to head compared to a blaster with more ammo versatility such as the Vulcan, but given the close quarters environment I use them in (I'm staying over at my Dad's place this week so it was in his kitchen) I don't think it's a show stopper by any means. 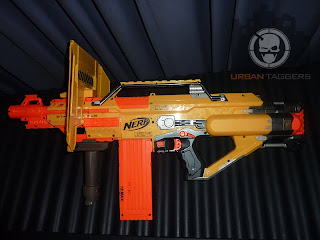 The Stampede's attachments, like with most tactical rail accessories are more for aesthetics than anything else; the bipod and the tactical shield utilise the Stampede's tactical rails to attach and are supposed to be for extra support and cover from opposing fire. I was really looking forward to these attachments but I have to admit, while I think they're cool and like them, they do kind of get in the way and you probably wouldn't miss them if you were using the Stampede on a regular basis. Like with most tactical rail attachments, they don't feel secure (which is understandable given they're just two plastic clips attached by a groove!) and i'd be more concerned that they'd fall off while I was running for dear life (after emptying a clip into whoever was sitting there on the couch at the time).


The Stampede has tactical rails all over the blaster-the front mount is for the tactical shield, the bottom rail for the bipod, but there are also side rails on either side of the blaster and a rail on top of the handle. You could very easily load it up with tactical lights or scopes, but the Stampede does come with an inbuilt sight, not unlike those found in the N-Strike Deploy CS-6 which works ok I guess.


Sizewise the Stampede is quite a large blaster (of course, it's the flagship model!) but given the type of blaster it is, that's to be expected. It's ranges are very impressive but that probably can be attributed to the fact that the Stampede apparently uses a direct plunger internal mechanism, that gives it more power out of the box than its reverse plunger cousins. This was a pleasant surprise and brings much joy to serious Nerf affectionados all over as well as opening up possibilities for modding the blaster- a few Google searches (or visit modworks for some good stuff on this topic..) should give you the info you need to get creative.


The Stampede did jam for me a few times, but to be honest it was my own fault with how I loaded the darts in the clip. A simple slide of the jam door fixed the problem, and although the Stampede did shred a dart or two, it happens when you disregard the warning labels all over the 18 round clips to tell you to ONLY put in 18 darts.
The new 18 round clips are a welcome addition to the Nerf CS blasters; of course as always they're interchangeable with other blasters in the CS line and the Stampede can in turn support the awesome 35 round drum of the Raider and the 18 round drum of the Alpha Trooper. It's quite generous for Nerf to equip the Stampede with three 18 round clips rather than just one. Thumbs up to Nerf on this one!
As I said earlier, all over the 18 round clips are warning stickers letting you know that you shouldn't load any more than 18 rounds per clip; I did learn the hard way that trying to stuff in 19 darts means eventually you will only have 18 rounds because the 19th will be shredded and unusable. Really- don't try it, it's not worth it:(
Sooo.. what do I think overall of the new Stampede ECS? It's just awesome. Seriously, it's a fully automatic, direct plunger firing beast of a blaster with awesome range and power, new 18 round clips to keep you in the game and it just looks awesome to boot. The included tactical rail attachments in the tactical shield and bipod may be more or less just for show, but oh what a fantastic show they reveal:)
Some have complained that it doesn't have a manual primer, but really I don't think it's a loss for this type of blaster; the fully automatic function makes sense for the Stampede and and it's not nearly as grating or annoying as the flywheel sounds of the semi-automatic Barricade RV-10. It's also a whole lot more fun than the Barricade, mainly because it looks cooler, feels nicer to hold and comes with some awesome accessories. Although it doesn't have the ammo versatility of the Vulcan and relies on the clip system, it's a much more maneuverable sleeker blaster and has more versatility as a blaster for a wide variety of role play scenarios.
Is it worth the wait? More importantly, is it worth the cash? At $109 dollars AUS it's definitely not cheap. But the cool factor IS high and everyone who's seen it, loves it and wants to play with it again and again. It's been priced as low as a rumoured $78 from Kmart, but it comes down to how long can you wait for something this cool? And given what it comes with, I doubt it ever will be in the sub 50 dollar mark (albeit Vulcans did for a brief moment in the Kmart and Target big sales). If you're worrying about the price, you could probably get away with cheaper blasters that are just a fun, but there's nothing really like the Stampede ECS; so if you're looking to be thrilled- this one is it.