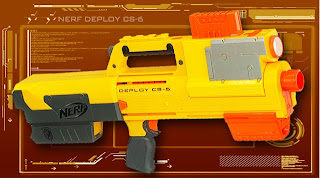 The Nerf N-Strike Deploy CS-6 is the first (and probably only) piece in the N-Strike range that can boast the unique ability of being able to "transform" into a weird looking flashlight/case thingy. A press of a button on the handle allows for a spring loaded quick change into a beefy looking dart blaster .

The Deploy comes in the standard N-Strike yellow, grey and orange colour schemes (although there is a new clear version that's now available). The blaster has an inbuilt red light that you can switch on and off next to the barrel- sort of like the recon's 'laser' sight. It is very lightweight, and utilises the streamline dart clips system that clip into the top/side of the blaster (depending in where you have it. It's quite comfortable to hold and does resemble that Halo/Aliens "pulse rifle" style that is a real hit with sci-fi fans.

The Deploy has tactical rails for N-Strike attachments, and the barrel is like the Recon that allows you to fit on extension barrels on the end. A couple of batteries power the red flashlight beam for night time fun:)

Arming the Deploy uses a pump action shotgun style primer at the bottom of the blaster. Sliding it back and forth arms the blaster. It also has an inbuilt sight (ie a drilled hole) through the handle to look through when firing.

The transforming of the blaster was a novel idea, but it lends itself to a kind of flimsy feeling grip which just doesn't feel good to hold.

Apparently the internals of the Deploy are similar to the Recon, which means modders aren't a fan of the reverse plunger system it uses. Personally, I find it does shoot further than the Recon, but as always, I am using it in a confined apartment space.

Overall I quite like the Deploy; it looks great and I liked the built in light, but have to admit I find the wobbly handgrip a lil' distracting. The transforming function is also more of a gimmick than offering any real useful functionality.
Deploys are not officially available in Australia yet, but are floating around on the grey import market. In the US they're around that 25-35 dollar US mark and are also available in limited edition clear finishes if that's your thing.