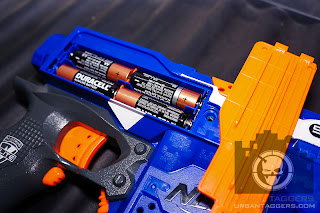 Thanks to a thought provoking piece from out pal Mike of Tactical Tag, there’s much buzz and discussion in the Nerf world regarding flywheel blasters which has prompted me (well various emails and msgs including one from My Last dart) to throw in my 2 cents worth on how I feel about them. Well.. 5 cents worth..cos we don't have 2 cents in Australia anymore:D

﻿It’s funny, because I’m actually kinda split over them. There was a clip fed flywheel blaster I had the pleasure to use back in the early 90s that I can’t remember what it was called (Jerm had one from Nerf Mods & Reviews back in the day) but really, it was when I got my hands on the Nerf Barricade RV-10 where I was really exposed to the flywheel blaster. Given that was considered by many in the community as my “first big break” I do have fond memories of the first time I switched on the Barricade and witnessed first hand that hair dryer sounding noise, but to be truly honest.. I actually didn’t really like it.

Let’s consider my own gameplay style for a sec- I’ve never really participated in organised outdoor Nerf battles because I am not a fan of that mentality where everyone is standing on front of one another and just trying to shoot the first person who comes within range. As a casual indoor ‘warrior’, what makes sense to me is the constant ducking for cover, sneaking up on opponents and landing that well placed shot on your target so in turn, when I do have my impromptu indoor style apartment battles, there’s a lot of hiding, waiting and anticipating. The only other way I really play is at work in an office environment across desks and partitions, but we’re quite restricted to very short burst battles and need to minimise disruptions for other teams less inclined to enjoy the foam.

Sooo, from a practical perspective, flywheel blasters make little sense and are a pain in the butt. There’s no sneaking around when your blaster is powering up and sounding like a hairdryer. Sure, I can understand that “intimidation” tilt many flywheel fans have, but if you’re all about cover and hiding, powering up your Barricade is essentially giving away your position. There’s no stealth here, and even if it turns into one of those hell for leather down the line battles where everything’s out in the open and sneaking is all over red rover.. it just gets really noisy- and not in a good way- the sound of hairdryers and milkshake machines invading just DOESN’T appeal to me at all. The time it takes to power up your flywheels also easily gives ‘tangos’ (oh look at me and my harrrrcore military speak:P) the heads up that you’re about to fire therefore allowing them to take cover, respond accordingly or bolt like a crazy person. Either way, they’re ready.

And that sucks. BUT…that all being said, there’s also something that screams to me more than just functionality, and that’s the fact that so many of these Flywheel gems look AWESOME:) Aesthetically, the Elite Stryfe with a Retaliator front grip and Pinpoint sight is my favourite blaster of choice. Prior to this, I did love the way the Rayven looked with its mad bull pup design and snubbed nose. And I am a big fan of the Nitron’s chunky tough as guts aesthetics.

Stock performance wise, they easily match their spring-loaded brothers in distance and accuracy, but do some voltage mods to them and HO-LY crap they pump those darts out with gusto ( I remember the first time Neil showed me what happens when you voltage mod a Rayven…madness I tell you!). What’s also cooler is the hum drum annoying buzzing noise of a stock flywheel hairdryer all of a sudden becomes an intense angry motorcross bike sound that is actually almost appealing:D It still grates after a while, but the best part is the power up is much much shorter than a stock flywheel, and that means you’ve got more of a chance of landing that surprise shot than you would with a stock flywheel. And that’s very cool. 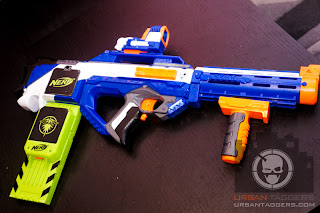 To me, flywheel blasters are basically the SMG’s of the Nerf world. Semi automatic means the flexibility of one handed play or close-to-body responsive two handed play. Some argue they’re lazy design (much less inside to consider than a spring powered one) but I think there is a place for them if just for the simple fact they look tough:)  Much will have to depend on your gameplay style if they’re right for you, but for us, an Elite Rayven and Stryfe sits in my apartment in our current living room armory:)
Posted by Pocket. Esq. at 10:28