We sent a Zuru Toys  X-Shot Turbofire to Nerf Mods & Reviews to have a play and see why we thought it was a bit of a dark horse performer in the alternative-to-Nerf stakes; what's interesting though is in the States it looks like it's going to be repackaged under Toys R Us' Air Zone brand and sold for..30 bucks. For once, Australia gets something not only first, but cheaper- 2 of them were/are being sold for 25 dollars. Given our current comparable dollar exchange, that's quite a saving.
You'll notice from the pic that the Turbo Fire is identical to the one we had released in Australia- there's no stock compartment as originally seen in the design artwork that has made it into the US release.
Being an Air Zone blaster, it looks like it's exclusively Toys R Us for now.
Nerf Mods & Reviews: Air Zone Turbo Fire
Posted by Pocket. Esq. at 23:03 5 comments:

Orange Mod Works- whether you're a seasoned modder or a practical goober like me, you'll appreciate how cool these customised kits are at improving your stock Nerf blaster's performance. The Recon CS-6 kits were hells popular, as were the Alpha Trooper CS-18 units; they've now announced stage one kits for the Raider CS-35 which excites us at UT headquarters cos the Raider's one of our all time fav's.
The Raider Stage One kit:
-Trigger catch
-2x Strength trigger catch spring
-Reinforcement plate
-6+ kg spring (More than 2X the strength of 2.5kg stock spring)

Also on the schedule is a new Longstrike CS-6 kit; Orange Mod Works have now answered the call for all of those who've whinged and complained about the Longstrike being all show and no go.

The Longstrike stage one kit comes with: 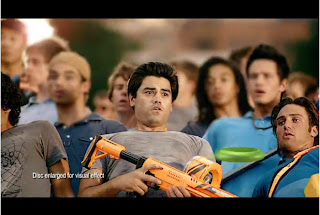 More intel from our man Jason B, check out the new listings on walmart.com for the upcoming Nerf Vortex blasters; there's a mad lil' video if you scroll down that really puts the "Vortex vs N-Strike" question in your face:) As always, everyone in the vid's.. older and chiselled:) Not like the Nerf wars I've seen.. they must do something different in the US;P
Walmart.com: NERF Vortex Praxis: Outdoor Play
Posted by Pocket. Esq. at 14:26 5 comments: 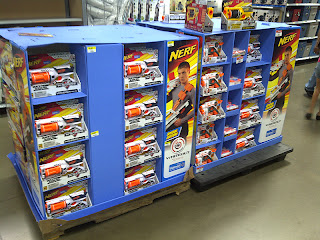 I saw these while on my travels (whoo.. Walmart.. such a novelty for me!) but one of our readers has sent through an impressive couple of pics that shows the Nerf Whiteout series are well and truly States-side. We love the Whiteout series. Totally:) 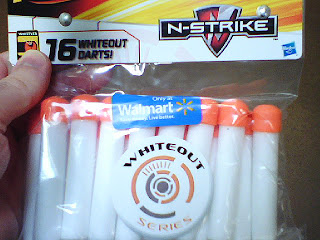 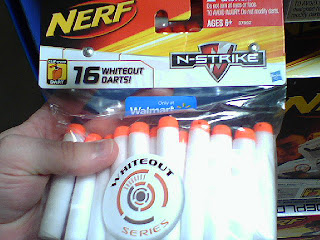 Unfortunately I haven't spotted these myself on my travels, but sent to us; spotted in a Walmart in the "middle of nowhere". Thanks for the intel Jason!
Posted by Pocket. Esq. at 12:30 13 comments: 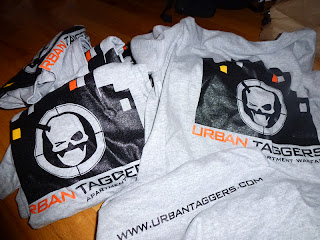 Sooo.. as we mentioned, we got our first batch of promo shirts made up and have already hit the streets in them, playing our own crazy version of Where's Wally:) Every day at various times of the day I'll be Facebooking/Tweeting my whereabouts and I, or my lovely other half will be wearing one of these shirts while we're enjoying our tour of the US east coast. Let's see if any of you happen to notice us and make yourself known:)
I'll be carrying one extra shirt (and yeah, could give you the shirt off my back but it's SOOOO hot here that I really don't think you want it!) with me daily; spot me, come over and say hi and a first edition Urban Taggers tee is yours! (if the size I've got on me doesn't fit you, just give me your details and I'll have one mailed out to you that does) Congrats to Jonathan R. who actually spotted me on the NY subway while I was actually inspecting the shirts after picking them up.. kinda felt you deserved one even if it was pre-promo!
Here's what they look like: 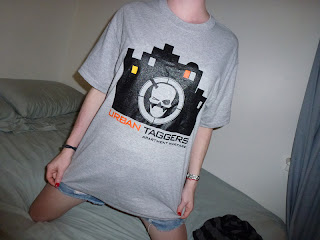 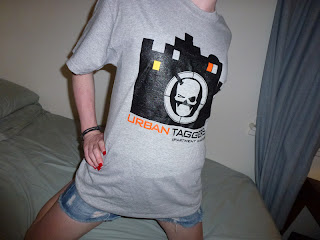 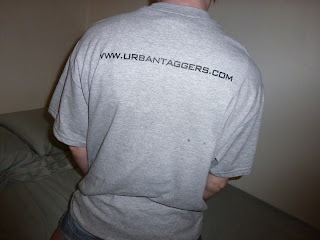 PS:- I know it'll be tempting, but I'd kinda appreciate it if you DON'T try and shoot me with a foam dart or water or anything else- although topical, the girl really doesn't like it that I'm putting the call out for people to 'assassinate' us! Old fashioned meet and greet - much more civil:)
Posted by Pocket. Esq. at 13:31 21 comments:

Email ThisBlogThis!Share to TwitterShare to FacebookShare to Pinterest
Labels: Random

Nerf have finally revealed draft picks for the much anticipated draft of the Nerf Dart Tag League Championships in Orlando, Florida. Several of our readers have received the call; a warm shout out to Mark Cruz who's one of the successful ones who're on their way to Orlando Florida to compete! Mark's also set up his own blog to cover is experiences- whatthenerf.blogspot.com.  Best of luck to you mate!

We are coincidentally going to be in Orlando at the same time as the Championships and would very much like to check it out for you all, but at this point in time we're not getting a whole lot of response from Nerf or their PR peeps so it may be an opportunity gone begging m'fraid! Either way, if you are a successful draftee, let us know how you fare, we'd love to hear from you!
Posted by Pocket. Esq. at 13:08 10 comments: 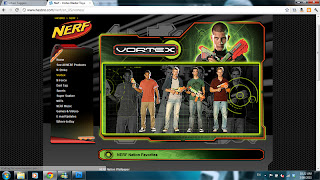 The Nerf Vortex site is now live on Hasbro.com; it continues with Nerf's marketing trend of using older models with these guys actually look the oldest we've seen to date (although they may merely suffer from "American TV show highschool teenager syndrome" where 16yo's are represented by 25yos). All the official information is there although if you're a fan of Nerf and not living under a rock for the past few months, chances are you already know everything there is to know:)
What's interesting is they seem to have done away with the 9-10-11 countdown marketing spiel; while I never want to be presumptuous and think it's because of all of the product leaks, but it does seem to be a really odd thing to be hyping something up for months and then... dismiss it a month early? "Get ready! Get Ready! It's coming... Ge...PSYCH! here already!!":P
Speaking of which, an interesting post on the Nerf Nation Facebook page:

This is what we'd be calling "embracing the leak". Rather than going into denial and getting angry, it looks like Hasbro have opted to act like the whole early release was almost deliberate. Conspiracy theorists (wow, we even get them in Nerf land) have suggested to me that they're using the post to "flush out" where all of the leaks occurred, but I'm really not convinced that there is really a point to that; one would think a company that was so large and on the ball would know exactly where their distribution channels are pointing and when.
On the whole, they're a toy company and their job is to promote and sell the hell out of as many units as possible so.. whatever works really:)
On a final note, it's great to see that the Australian Nerf site has FINALLY updated their content; admittedly  they're still using the old Nerf N-Strike Raider graphics on the front page, BUT they've add the current line of blasters to the products,as well as included RRP and descriptors (no pics yet) of the Vortex line. 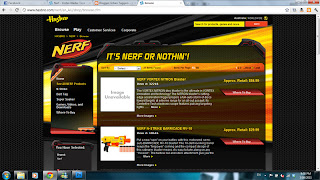 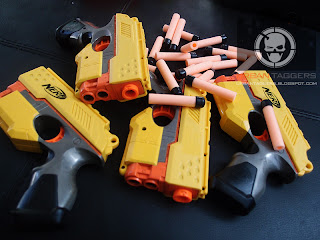 An aesthetic fan favourite, the Scout IX-3 is a single shooter that looks fantastic due to its design but is difficult to obtain unless you're wanting to pick up a Titan + Hornet as well, as it generally only comes with the Unity Power System. I've heard rumours of them being sold individually but haven't been able to verify that; one thing I can now verify now is the existence of this Scout IX-3 dual pack, featuring all new N-Strike colours.

I admit I do like them in the red, but if you wanna coordinate your blasters, this is the way to do it. Pics after the jump.

It was bound to happen:) What happens when you connect a Nerf Dart Tag Swarmfire with a Microsoft XBox 360 Kinnect.. Thanks to Jason B or the lead!
Posted by Pocket. Esq. at 07:09 No comments: