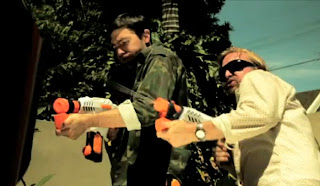 I missed out on checking out Tropfest this year; for those of you who don't know what that is, it's an Australian short film festival that has now gone global and apparently is the biggest short film festival in the world. Every year a theme/object is announced that must feature in the film- this year's object was 'balloon'. 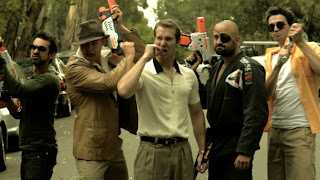 One of the finalists was called "Let it Rain" and just from checking out the screen shots, you can see why we thoroughly enjoyed it:D Check out details of the film here or watch the full short film after the jump- it's pretty cool:D

Another European website shops.ch has a listing for the upcoming Nerf Vortex Revonix 360. We've seen the videos from the NYC toyfair showing it in action and its 'load-on-the-fly" drum but up until this point I thought it was sort of a similar type of blaster to the Pyragon shooting 1 disc at a time but with slam-fire capabilities. We also heard rumours it was part of the "Multishot Madness" range from the London Toy Fair suggesting it shot two discs at the same time.. but this listing suggests it shoots 3 DISCS simultaneously which is new:) In any case, I do very much like the styling and paint scheme- it's tough:) (ok maybe not the Hotwheels style flames on the side!) 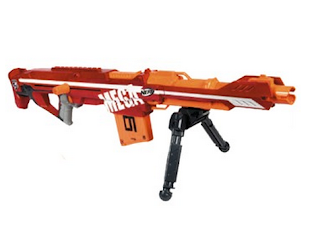 More info of the proposed upcoming Centurion from our trusty-but-slightly-left-field European site of gold, 'Soundmedia.ch'- mainly another picture of the blaster out of the box. I still think that "MEGA" looks really out of place, but my guess is to make it REALLY obvious that it doesn't take standard clips.  It's been already called the Longshot successor (though one should be cautious when making such claims before really trying it out... Longstrike anyone?!:P) and there's much discussion on whether that front barrel detaches like the Longshot or not; also interesting is that bipod is HUGE!

Looks like everything is big with the Centurion:) Thanks to everyone who sent in the lead for this one! 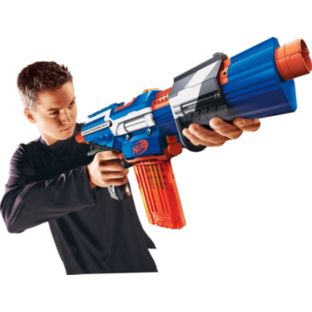 Just a quick reminder that My Last Dart is giving away the new Nerf N-Strike Elite Alpha Trooper- the competition IS worldwide so get into it! From his blog:

To enter all you need to do is head over to my Facebook page and hit 'Like' to follow my FB page not the post, and leave a comment with why you should win the in the status called 'Elite Alpha Trooper Giveaway!'

If you are too young for a Facebook account, you can comment on the YT video. Entry is limited to 1 person per family/household - your mother, sister, dad or grandfather, cousin, second cousin, long lost uncle or aunt can not enter. Definitely not your pet hamster or dog (people have seriously asked). I will announce winners 31st March 2013 midnight. I ask Winners to post a picture of themselves with the EAT when you receive it. 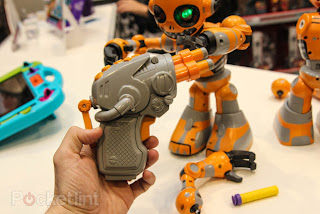 I do have a Robosapien.. but not like this. Wowwee, the guys behind Lightstrike, Robosapien, Robo Raptor and Robo Meerkat (ok I made that one up) have this new neat addition aptly named "Robozombie". He moves around like his less dead older brothers via remote, but the novel spin on it is the remote also has a foam dart blaster built in. Put the Robozombie into attack mode, and you're basically given the task of shooting its limbs off (go for the head shot, it's cooler) before it gets you..
Check out more at the link below:)
ZombieBot undead robot: Walking Dead meets C-3PO - Pocket-lint
Posted by Pocket. Esq. at 00:09 1 comment: 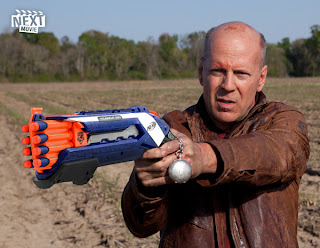 SO looks like I'm not the only one who does this:D Check these out, and more on Next Movie. Nice to see photoshopping with more updated/new gear:) Cheers JB for the lead! 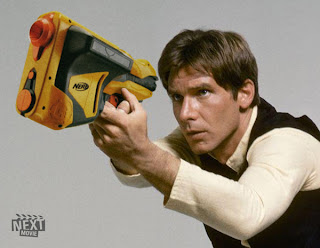 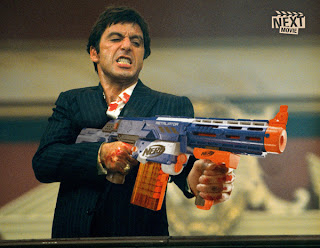 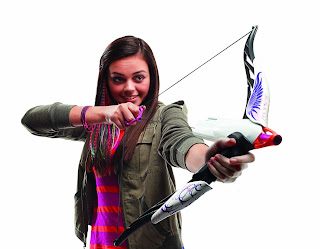 Toy News has published some more release information and UK pricing on the upcoming Nerf Rebelle line set to come out in their Autumn (so our Spring for Australians) - £19.99 for the Heartbreaker bow that will come with 5 arrows.

"It also features an accessory rail which provides for five-dart storage and allows girls to customise their blaster with fun add-ons."

More info and pics after the jump. Cheers Jason for the lead!
Read more »
Posted by Pocket. Esq. at 23:13 No comments: 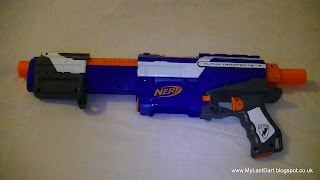 My mate Ash from My Last Dart in the UK has got his hands on the new Elite Series release of the much loved Alpha Trooper. Now called the Alpha Trooper CS-12, it's boasting Elite ranges and the Elite colour scheme and they've even replaced the name badge from the original "CS-18" to "CS-12". What's interesting is they've gone THAT far... but left the original N-Strike badge in the blaster's handgrip. Lazy fellas!

From an Australian view point, unless you import it, this one's PROBABLY going to be a miss if you're not a modder. They've replaced the 18 round drum with a 12 round clip (similar to the Retaliator one) and obviously it'll be detuned for Australian safety standards. My experience thus far is the 'detuning' of these blasters brings their performance to sub original N-Strike distances which I find REALLY disappointing. That being said, if you ARE a modder.. I guess things could get interesting given the plunger system..

Have a look at his post, there's internals pics as well:D

Rant: Tribute to the sucker and whistler dart

Nerf’s bid to ‘streamline’ (hehe) their new Elite series darts was a great idea; one ammo type to rule them all per se. Whether it be a clip system blaster like the Stryfe and Retaliator, to a revolver style like the Strong arm or a single shot like the Fire Strike, all Elite series blasters now use one single type of dart. Which is awesome.

That all being said, I would like to take a small moment to pay tribute to the darts of old- those that were the preferred options for the casual nerfer. I am talking of the suction cap “micro darts” and the whistling “sonic micro darts”:) 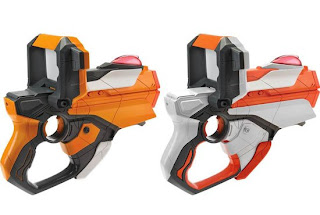 When Hasbro released their new Lazer Tag Augmented Reality series of laser tag blasters, we all thought it sounded like a fantastic idea. Hell, tech writers were all over it and thought it made for a great concept, bridging that “real life video game” concept that has constantly been thrown around since laser tag was even invented.

Hasbro seem to have a fair bit of faith on the AR idea, as we’ve seen them port the idea over to the upcoming new Rebelle line to be released later on this year. Once again, the toy/tech media have been all over it and claim this to be an innovative way to bring the tech worlds and the toy worlds together. Hasbro aren’t the only ones, with other toy companies releasing similar wares. Kickstarter funded App Tag brought out their App blaster because hundreds of people believed it a phone based blaster would be a great idea. Tek Recon is the new kid on the block that we’ve only seen glimpses of but is about to make the humble rubber band gun seriously bad ass with iPhone apps to have a near “Halo” experience with your friends. This MUST be the way things are going.. Right? 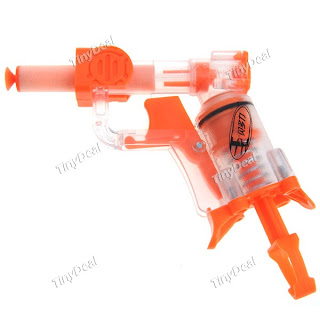 Ahh Google. Doing a search for 'suction cap dart' somehow turned up this image of what clearly (hehe) looks like a Nerf Jolt clone, only for a rip off I actually quite like the way it looks. They've also changed the priming arm t-bar style of the Jolt to a Nitefinder style ring so it's not a COMPLETE copy.

Apparently the kit comes with the blaster and an overkill of 10 darts. Which is probably why they're asking short of 10 bucks for one. Probably won't buy but do like to look:) 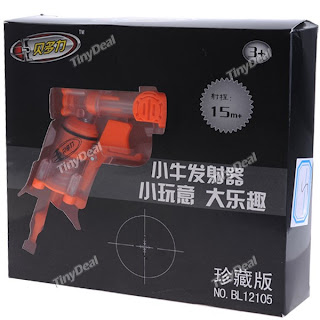 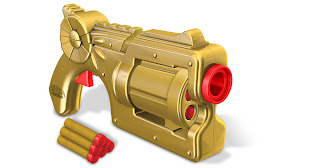 I admit I'm not really up to speed with what Skylanders is (other than a video game that was part of the Spyro the Dragon series and seems to have spawned a bootload of toys since) but I thought this "Trigger Happy's Dart Blaster" they've released does have visual cues from one certain iconic Nerf blaster... :) Cheers JB for the lead! 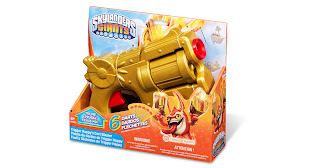 
Joerg Sprave of the mad youTube sensation, the Slingshot channel comes up with some crazy home made weapons. Posed with the problem of how to separate the humble Oreo cookie, he decided to come up with this pretty hilarious pump action Oreo gun. Check out the vid.. it's madness!:)
Posted by Pocket. Esq. at 21:18 2 comments: 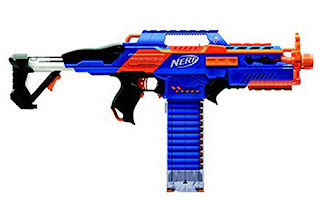 As seen.. well pretty much everywhere:) That much anticipated automatic N-Strike Elite blaster has been spotted on another one of those European sites for preorder. The N-Strike Elite Rapidstrike CS-18 is looking the bomb with what looks like an integrated stock, boot loads of tactical rail goodness and a very spunky looking 18 round clip. I'm guessing it's flywheel given the secondary 'trigger' but anyone who's seen one can prove me otherwise!

Thanks to all the people who sent in the intel!

Nerf Vortex Revonix 360: Will you?

What are your thoughts on Nerf's upcoming new Vortex blaster? The Revonix 360 features slam fire, further distances and a novel loading system, but would it be good enough to topple the all awesome Pyragon as the Vortex blaster of choice?
Posted by Pocket. Esq. at 23:59 16 comments:

Ever since the Longshot, fans have been going on about wanting a 'Sniper rifle'. Then the Longstrike came along, and while it LOOKED the business, it wasn't really anything remarkable as far as performance was concerned.  In fact even a Nitefinder out performed the Longstrike as far as distance and accurancy was concerned. The the Elite series came along and we're thinking "ok.. it's going further still.. this is good..." but there was still yet to really be a "sniper rifle" per se.
Well! Thanks to My Last Dart, introducing the upcoming new Nerf N-strike Elite Mega Centurion. Boasting ranges of 100 feet that is something unheard of in the stock Nerf world, thanks to these new "Mega series darts" (apparently 1 inch deep by 4" long)  and a whole new internal system that's apparently something pretty darn sweet. The blaster itself boasts 1 and a half metres long..which is.. well big.
Check for more details over at My Last Dart as they were really the ones with the scoop and all the juicy info.