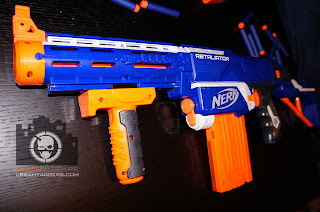 ﻿
Other than the awkward “we don’t talk about him at parties” Hailfire, I’d have to say my least favourite Nerf N-Strike Elite series blaster is the Retaliator. It’s not that it’s bad per se, it’s just I never really liked the Recon in the first instance, so regardless of how much better it performs, for me it’s still a Recon. It’s still got the awkward top sliding cocking mechanism. Ugh.

The Retaliator DOES come with much needed ‘bits’ in a rather somewhat stark accessories market for the Elite series, giving us a barrel extension  (albeit repainted one from a recon), all new stock (that’s kinda too short to be of use to anyone over the age of 8) and a front grip (ok I love this grip and use it for my Stryfe) but I found this was all a kind of ‘smoke and mirrors’ approach to the fact that the first Elite series blaster was really a revamped older one. That being said it does seem to be pretty popular with Nerfers from the pics I’ve been seeing. I mean it’s even the only blaster in the Elite range so far that Orange Mod Works have created a kit for. And yet to me.. it's still a Recon.
The Recon was actually the blaster that almost got me OUT of Nerf. After all the mad fun office wars we were having with Nitefinders and Mavericks, the office arms race suggested we needed something that was going to bring more grunt to the table, and so I went out and bought the Recon. You have to understand from the point of view of the total newbie, (which we all were at the time) the Recon looked totally BOSS. And in those days, it was 50 bucks, so it was some serious kit.. or so I thought. The fact we found it was easily outclassed by the Maverick and Nitefinder and had an uncomfortable cocking mechanism just had us sorely disappointed and delegated it to the back of a cupboard for quite a while. I don’t think I’ve ever been able to disassociate that negative experience from my mind. 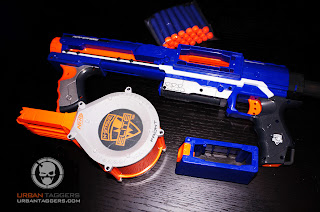 Interestingly enough, after this episode, it was the N-Strike Raider that got me back into Nerf and while it too at the time was revamped in the Elite series (as the Rampage) it seems to be almost forgotten and unmentioned in Nerf circles. While the Retaliator still gets quite a fair bit of press and play, buzz on the Rampage are surprisingly quiet. On my trip to LA last year, I had an opportunity to potentially have an impromptu Nerf war and given I normally don’t carry Nerf guns with me on holiday, I had to pick one up- I chose the Rampage given at the time there was only the choice between it and the Retaliator (and the yokel loud cousin we don’t talk about at parties). I thought it was an obvious choice. Wouldn’t anyone? But apparently not. Retaliator for the win for most. Which I just think is weird:P 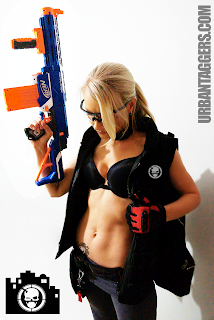 SO what IS the Elite blaster of choice for you these days? If it was purely on functionality, I still would go with the Rampage. If it was for cool factor, probably the Stryfe. If it was for poser factor? The Roughcut. But I really wouldn’t choose the Retaliator.

But I am interested to hear your views why you WOULD. :D
Posted by Pocket. Esq. at 11:25