There have been a LOT of rumours about this lil' puppy since the N-Strike Elite series were announced; the priming handle of the Triad EX-3 was so similar to the existing N-Strike Jolt, that we were lead to believe it WAS the Elite version of the Jolt. The Triad EX-3 however is somewhat bigger, and while following similar design cues, is a different blaster in itself. And it fires three darts. Cool! More after the jump. 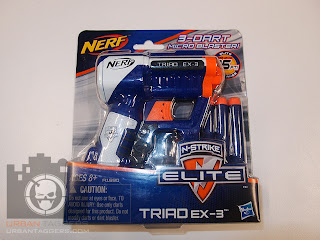 The Triad EX-3 comes in a blister pack, accompanied by three Elite darts. It's one of the rare NEW Elite blasters that still has a alpha-numeric code name for some reason- but no doubt we'll just call it the 'Triad' and be done with it.:) It's still quite a compact blaster but definitely a lot larger than the Jolt, and doesn't fit into lil' places easily like the Jolt does:) 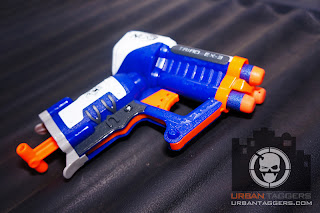 I was initially sceptical about the Triad, mainly because I thought it'd be a single shot blaster with two empty hole dart holders like other 'EX-3' named gear. Surprisingly enough, it's not.  It lives up to its name, so given it's the 'Triad', I'm happy to say this blaster shoots three darts, one after the other. Kinda like magic at first before you realise it's just some clever tech inside:) 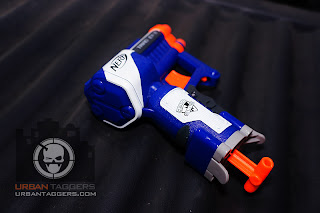 Although it's a different mould than anything else, it's still taking most of its design cues from the Jolt, right down to the somewhat uncomfortable "cut-into-my-hand" grip. It's quite fat to hold and still uses the same priming mechanism arm as the Jolt. 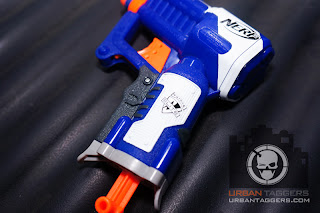 Unlike the repainted Jolts, the Triad does sport the N-Strike Elite logo on the handle. 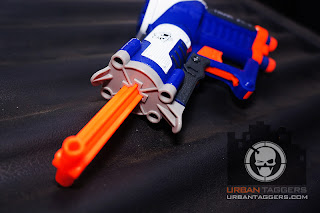 Pulling the arm down cocks the Triad, and then it's simply a matter of squeezing the trigger. 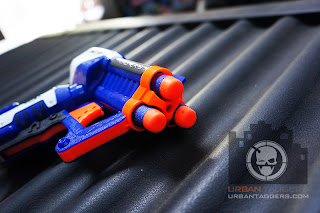 The Triad doesn't have the option of firing the darts simultaneously, but what it does do is fire the darts one after the other with each cocking of the priming arm. It's actually pretty cool, as it detects which chamber has a dart loaded and will fire so long as it is actually loaded. We've played around with dart order and trying to "trick" it into firing a blank, but nope, several darts to the forehead later.. 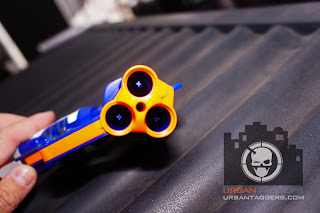 Performances are actually REALLY impressive. From my tests shooting it down an empty corridor at my day job office, it consistently outperformed the Stryfe on ranges (and definitely attracted a lot more 'ows!' from shooting people in the back) It's accurate and packs a significant punch, and we haven't found any of the chambers to be any more powerful than the other. 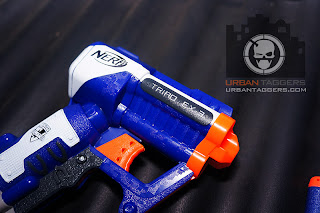 I picked up mine from Amazon for a pretty ridiculous price of 19.95, but they should be a lot cheaper in US stores. No sign of them here in Australia and alas no doubt they'll be sporting less powerful springs for the grey trigger pieces, but I definitely was surprisingly quite impressed by this number. I'll be interested to see how it goes against the Firestrike, but from a game play point of view, I'm half suspecting it'll have the drop on it. 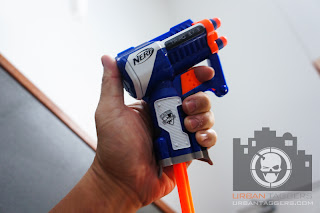