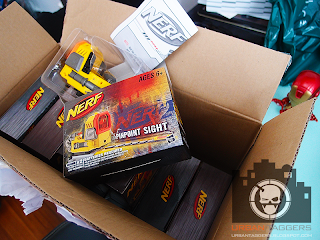 So finally! An update from me on the situation. I'll recap and then do a summary at the end. It's not the happy ending a lot of you wanted but it's at least an end to the matter - so that's a relief for me. It's a bit long, but I think it's only fair to give you the full story given how supportive you've all been! Details after the jump.


On Saturday 28 April 2012, David Peattie, the Managing Director for Hasbro in Australia & New Zealand sent me an email. His tone was polite and courteous so I am not going to reproduce the letter here, but to summarise ..

- "recogniz[ing] the timing of the promotional outreach and the outreach on behalf of the outside investigation team [was] an unfortunate coincidence. Hasbro’s local marketing team here in Australia was unaware of the investigation taking place given the confidential nature of this type of situation."

- said that "as a global company with many popular brands, [Hasbro has] an obligation to protect [its] intellectual property ... [Hasbro's] brands and [Hasbro's] products are [Hasbro's] business so if [Hasbro] suspect[s] that unauthorized or confidential information is being leaked, stolen or compromised in any way, [Hasbro] must investigate how this is happening."

He also said he would ensure that I would receive any Nerf products that had been promised.
I wrote back on Sunday 29 April stating that:

- it's never been my intention to bring any damage to the Nerf brand and that the only goal of my blog was to share my Nerf hobby with others and that this the blog set up mainly due to the lack of information and product range that was available in Australia at the time.

- I agreed that the timing of all of the letters and visits from representatives was very unfortunate - I let him know that we actually tried phoning the Hasbro Australia customer service line to get through to the legal department/someone to clarify the Sunday visit from the lawyer's representtaives and the preceding events but never got a call back despite leaving a contact number i.e. posting to the blog was the my only way of stating my side of the story.

- I would like to be able to post a statement to the blog that the matter has been resolved and that the investigation has been called off. I repeated that I had handed over all information that I had, but in order to resolve the matter, I was happy to answer any final questions they might have - so long as it was through him and not the Hasbro lawyers.

"I think the popularity of Urban Taggers is because it has been the place where people can go to learn all about Nerf - both current and upcoming products. I discovered that the information I offered on the upcoming products generated a lot of positive interest and anticipation and people seemed very excited to purchase these items when they were finally released. While I appreciate that Hasbro has the right to market its products in whichever way it chooses, I am disappointed that when an issue arose, rather than speaking with me directly about its concerns first and trying to engage a polite and productive manner with a loyal fan - lawyers were sent in. The end result is that blogs like mine will have to cease generating a positive buzz for Nerf. This has been upsetting given that I have done nothing but promote Nerf not just in Australia but worldwide, I have never asked for anything from Hasbro (whether in the way of promotional products or any form of official endorsement). The negative press in the past week and the restriction of my ability to post and write freely about images and products that I have found on the internet (which I assumed were freely available and lawful) has left me unable to promote Nerf the way I have in the past. To be honest, some of the widespread coverage, like the recent NMA video (http://www.youtube.com/watch?v=i7HoC_Rnx_U) while funny, made me a little sad as they portrayed Nerf fans in an unflattering light, whereas I've been trying my hardest to make Nerf look cool and normal to the masses."

David then replied on 2 May and advised me that: - although he is not controlling the investigation, he was able to tell me that "while [the investigation] is ongoing on a global level, [he has] been assured there is no present plan to take specific action against [me] personally."

So that's that. I can also report that yes, we've received the eleven pinpoints, I will be giving away as prizes to urban tagger readers - more on that later. Also for any legal eagles reading this - it will be by way of a game of skill, not chance, so no letters please ;)

I know it's not an apology (I'm trying to be zen here)  but there has been an admission that their timing was unfortunate and I'm going to try and accept that it looks like it was all a big misunderstanding and internal coordination issue. If that's the case, I think that any thumbs down would go to Hasbro US and its lawyers and we can probably give the benefit of the doubt and thumbs up to Hasbro Australia who seem to be trying to do the right thing and engage with bloggers in a polite and friendly way. Wish I had heard from them earlier as you can understand why the unfortunate coincidence of timing would make me think they were related, but it is what it is and I accept that.

Every week I receive a fair amount of great leads from readers who provide me with information that they've found on the internet, and often it is info on upcoming pre release blasters. You can see that even while Urban Taggers has been down, that info is still out there and others are posting about it; I guess we all feel the same way about blasters- love 'em, want 'em, and wanna share that love with everyone:) I really do appreciate that in the short period of time we've been able to have such a large readership, and that's just been awesome. Just hope I can maintain that without any more acquiring the new and unreleased gear- I still think googling news and information should be ok- thoughts?

So where do we go to from here? I'm still unsure to be honest. I know things will never be the same but I'm hoping Urban Taggers can still exist and do..what we do- bring the news of the toy blaster world to our readers and share the love with the masses.

Now.. just gotta work out how to give out these Pinpoint Sights!:D
Posted by Pocket. Esq. at 14:12