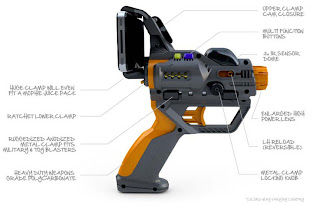 We've been loyal followers of the kickstarter.com App Tag project- and now it's come to fruition and available for preorder on the revamped laserblaster.com site for $49.95 AUS. It's looking pretty sweet, and given we were contributors to the project early on, we should have 4 coming our way, so I am VERY much looking forward to giving them a decent test run sometime soon. Loving the way the blaster design has evolved, though the attachment WILL fit on any toy blaster really which is very cool.

Our man in the know Jon says:
"HEX3 have appointed Australian and many international distributors, so AppTag will be available in all major department stores soonish. We'll also have some killer apps available for Android and iOS when we launch, and I'm visiting E3 in June to show off AppTag."