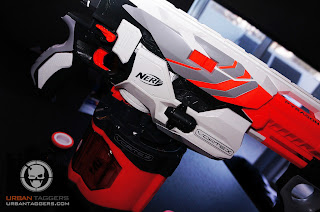 Of all the kit that has been on offer this year from Nerf, the one that I've really been keen on is the upcoming new Vortex Pyragon. It was allegedly an updated Praxis, which was my favourite of the original Vortex line but boasting an all new 40 round drum, slam fire and of course the thing that got me hyped from the start; finally an AWESOME stock out of the box colour scheme that would be the envy of Stormtroopers everywhere.

Well, I finally got one (ok I got two) via very ordinary transparent means of Amazon.com and I was pretty damn happy with it. You know how I'm always going on about my much loved Alpha Trooper as my all time favourite Nerf blaster? Well truth be told.. the Pyragon MIGHT just topple it. Review and pics after the jump. (warning, pic intensive) 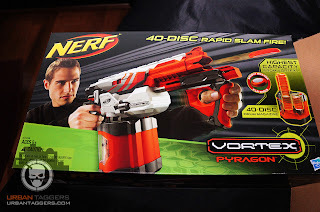 There's no real explanation as to why they've changed the colour scheme for the Pyragon, nor is it any "whiteout" or equivalent series- but I won't ask questions because I like it. Nor does it explain why there's bright orange XLR discs either- but I too like these as well:) The box just suggests it's just one of the Vortex line of blasters and mainly boasts the high capacity drum as its main selling point. 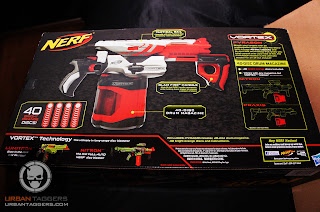 Interestingly enough, you've heard of our American friends who received their Pyragons from Hasbro themselves and had boxes that featured the updated Nitron with the shield? Nope, both of my Pyragons feature the scoped Nitron on the back. Interesting, given mine came from the US too:D 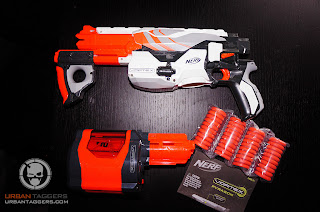 Internal packaging is at a minimum too which is all very green of Nerf- in the box you get the Pyragon, the 40 round drum and 40 orange XLR discs. Oh and a manual:D 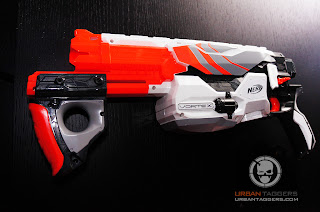 While I found the Praxis a little rattle-y, the Pyragon feels a whole lot more.. solid. It seems sturdier, similar in weight but just better built, even with the tracking of the pump action cocking mechanism feels smoother and sturdier. I've gushed about the colour scheme already, but it just looks awesome. The only thing I personally would change are the 'tiger' stripes over the grey- just looks out of place in my opinion but it's no show stopper. The whole dark orange, white black and grey also tends to go with a whole lot more of the other Nerf accessories (more on that later) better than.. that pus green of the original Vortex line.. 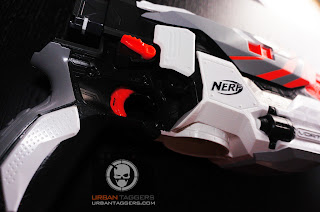 While the design is very similar to the Praxis, unlike the Lumitron (which is just a repainted Praxis with a firefly tech clip), the Pyragon is a different, (albeit subtle) mould. It feels similar but the details show they've not just rehashed the same blaster again. The Pyragon is thicker and fatter. 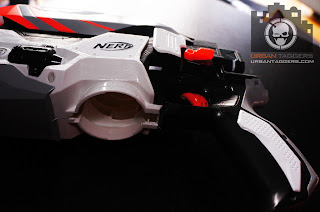 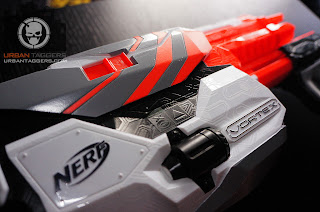 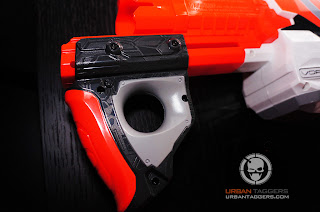 Another difference is the pump action cocking mechanism. Given the Pyragon boasts continuous firing with the trigger pulled (what they call 'slamfire') the Pyragon has a new front on grip closer in themes to the Raider/Rampage front grip only with a thumb hole. The grip looks tough, and slides back and forth beautifully on the tracking bar. 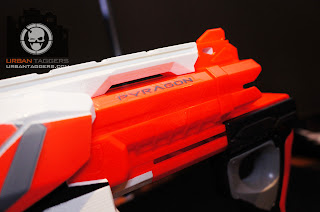 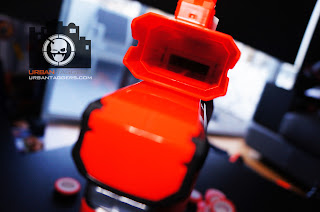 Nerf have opted to supply the Pyragon with new bright orange XLR discs, unlike the traditional green which have been guilty of blending in too much outdoors amongst grass (not so much in my apartment). I like the bright orange, they stand out, go with the Pyragon's scheme and look awesome, though I'm unsure WHY they've chosen to make orange discs. Why not I guess:) 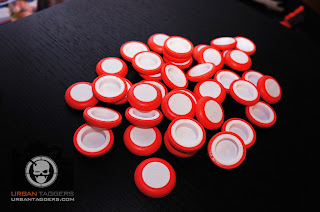 The big selling point for the Pyragon is the new high capacity 40 round drum- never before seen and quite an innovative design. Out of the box it comes with a warning sticker explaining the correct way to load the drum. It's not exactly counter intuitive, but it's not something you just pick up straight away so maybe I'm getting old but I did have to read the instructions.. just a lil' :D 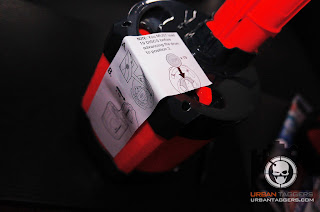 The drum is very solid and weighty and quite well made, with a dark grey and orange plastic, and a orange translucent window to see inside. Storage wise, it has four chambers to store discs and obviously the standard clip fit neck. It's basically a matter of loading each chamber and advancing till they're all full.

On the neck is a small switch that locks the drum in place- you need to push this up to allow for the chambers to advance. 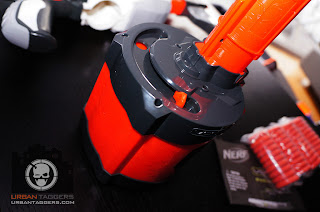 The orange switch on top of the grey drum lid is what's used to advance the chambers along once the discs are full. You slide it along and there's a little indicator on the top of the drum to tell you which chamber you're loading, as well as through the translucent window it also shows you the number. 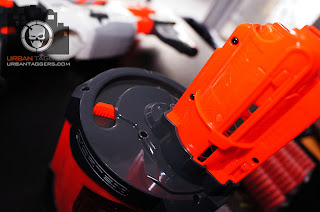 Once your chamber is full, you can advance it on to the next one and continue. It' kinda a time consuming task, much like filling up a 35 round Raider drum, but for some reason feels like it takes.. longer:P 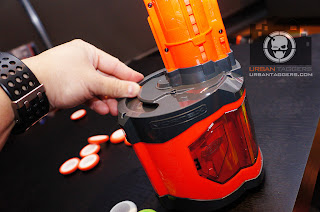 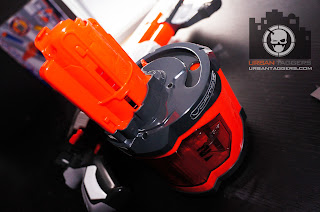 Once everything is loaded, it's simply a matter of sliding the drum, (facing forward) into the Vortex blaster. Naturally it fits all clip system Vortex blasters, so that's including the Nitron, Praxis and Lumitron. 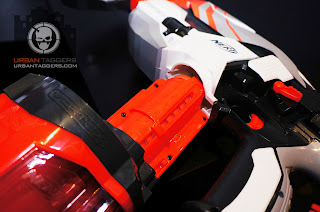 All and all it's a very solid piece of kit, and for some reason several people who've played with it have said it does have a very "shock trooper" feel about it (whatever that means), given it's sans stock, all beefy and nuggety and looks very aggressive like. Given the way you hold it, with the front grip the way it is AND the large capacity drum in play, I guess it does feel more like a "shoot from the hip" heavy /suppressive fire kind of piece. The slamfire capability is probably the smoothest I've encountered on a Nerf gun, and it makes it soo easy to just fire off 40 rounds in a very very short period of time:) 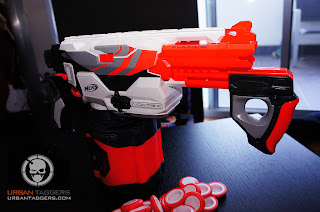 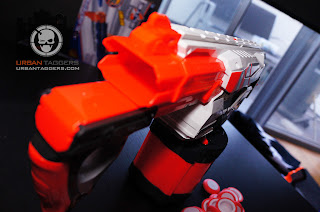 Sooo about performances. The Pyragon shoots further than all of my other Vortex blasters. Again, I don't crack them open so I don't know why (I think Bazookafied over at Tactical Tag had some clues on this) but I do know the discs seem to come out faster, more accurately and further than my Praxis and Nitron. The discs seem to be the same feel and weight so it's not that, so it's something to do with the Pyragon's internals. I haven't gotten outside with it yet (and you know we rarely do take them outside) although we're clearing that 50-60feet distances pretty easily. Against the Retaliator it's definitely still holding it's own and we shot back and forth without trouble of making the range. 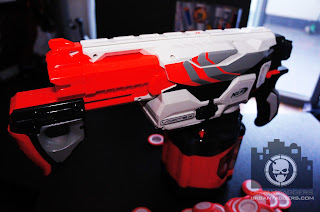 Performance for Vortex blasters have always been good so what we have here is a blaster that surpasses the already impressive Vortex ranges. Adding to that the very nice slamfire that gives you a very quick and effective way of emptying your load without any jams; I've been playing with the Pyragon all afternoon and so far, jam free. I like it! 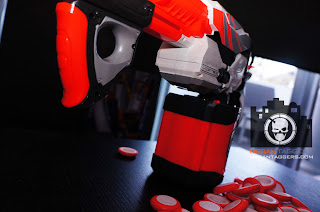 Being a Vortex blaster, the Pyragon fits all standard Vortex clips- the 10, 20 and the Lumitron's Firefly clip. 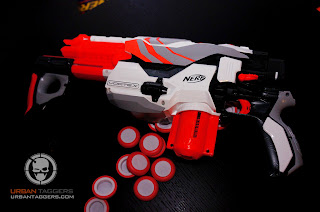 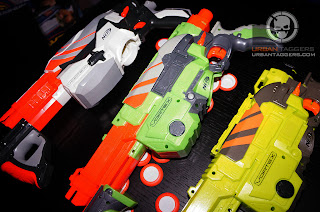 Attachments are where you can really have some fun with the Pyragon. It's colour scheme lends itself to many different attachments without 'clashing' unlike the original Vortex blasters. There are some more obvious, such as the Super Soaker kit:


Given the use of white, it doesn't look that bad with the Super Soaker Shot Blast accessories either. Naturally it'll suit the white and dark blue schemes better, but check out the all blue finish:

It's still not offensive to the eye and actually kinda nice. Where I find the Pyragon looks really tough, is with painted black accessories- I happened to have a painted black Raider stock on hand:

But even with other colours, it still doesn't look half bad.

In fact, the ugliest match of all would be.. with it's Vortex sibling's colour scheme:

And of course, the 40 round drum fits all other Vortex blasters too; it actually really suits the Nitron:D
Soo, final word? I LOVE IT. Nerf have brought out a kick ass blaster that covers off everything I like- it's short and nuggety, with a good pump action cocking mechanism- it's paintjob looks absolutely AMAZING and as far as I'm concerned is up there as the best looking Nerf blaster to date. It's got jam free slamfire that feels so natural to pump and fire and it performs beautifully out of the box. Really, it's what I've been waiting for and I'm happy to say Nerf have delivered. If you have the chance to get one I'd definitely recommend it- in fact get two.. I did:D 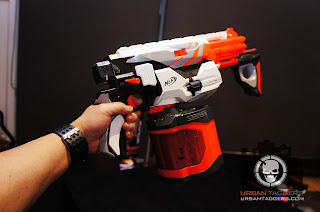