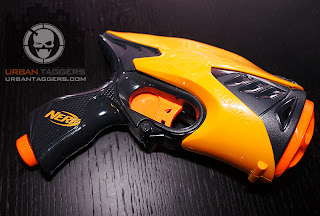 New blasters for all of Nerf's lines were announced early this year- A new 'Hailfire' to helm the N-Strike Elite, the all mighty Pyragon was the new Vortex blaster, and the Dart Tag line received the Snapfire 8 to its ranks.

The Snapfire 8 has generated quite a bit of interest since it's announcement being a rather compact non-motorised-yet-semi-autofire blaster and to date has only really been seen in Singapore (do correct me if I'm wrong) Thanks to Ben 'Psyk' Koh of Nerf SG, we got our hands on one (ok two- I always order multiples) to put it to the test and see if it's all that it's cracked out to be... 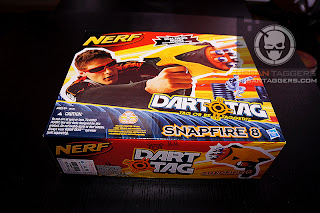 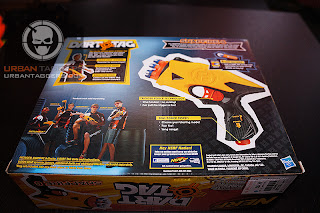 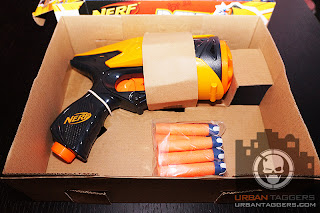 Inside the box, it's the blaster, 8 dart tag darts and a manual. It's pretty easy to get out of the box too which is nice. 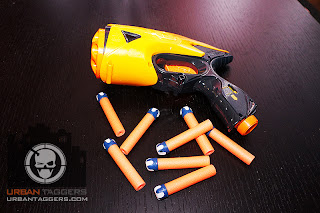 The Snapfire 8 follows similar design cues to the big daddy Swarmfire in that it's got that big whale looking front but then sort of slims out at the back, with a rather aggressive cut out part for your thumb that makes it sort of resemble those old Star Trek phasers. 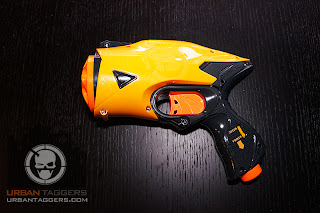 It's quite comfortable to hold, and has a very long grip for big hands. I don't have big hands, but that's ok:D  It's a lot smaller than I thought it'd be, but the fatness of the muzzle makes it impossible to easily holster/pocket, but there's no loops anywhere to clip it to your belt or anything. 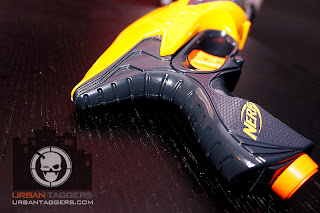 It's shape actually looks almost... comical, like a Marvin the Martian style blaster; whereas Nerf's other lines seem to be looking quite tough and realistic in design, the Dart Tag blasters seem to really be wanting to go a different route, similar to sporting equipment, which is true to its general marketing message of Dart Tag being a new "action sport". 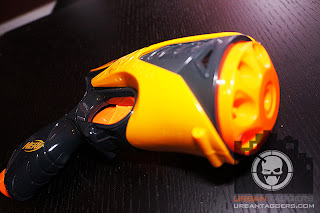 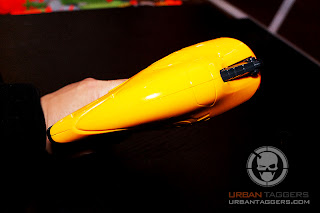 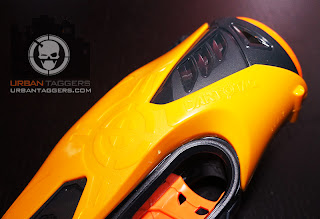 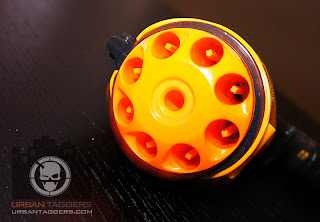 The Snapfire 8 holds that many darts- eight- and they slide in similarly to the Speed Swarm and Swarmfire at the front. I've heard rumours of the darts falling out, but this hasn't happened to be yet- they're quite a snug fit and I've tried them with Elite darts with no problems. 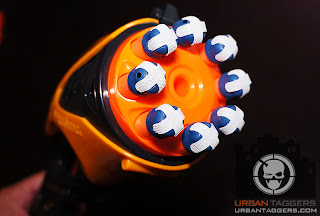 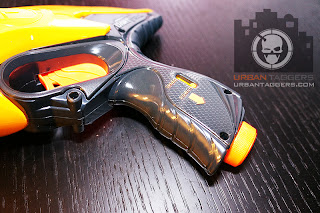 The Snapfire 8's selling point is it's a non battery powered semi automatic with two main settings- "speed" and "power". There is a dial at the bottom of the grip that you gradually rotate and that allows you to customise your desired setting depending on how you like to play. 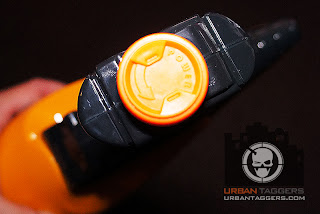 What it basically is doing is increasing the resistance that fires the dart and in turn that of the trigger- if you want more power, the trigger is really stiff to pull back but allows for your darts to fire further, whereas the speed setting is much softer but you sacrifice the power and hence full range available. 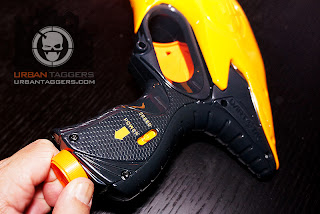 It's kind of fiddly to do, and after a while you just set it once and leave it alone. To be honest I found I just wanted to leave it on the "Power" setting and just deal with the ridiculously stiff trigger. 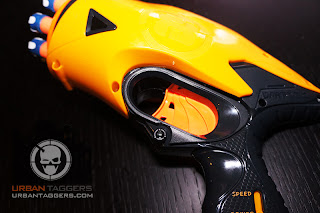 Speaking of the trigger, it's a totally unique system I've yet to see before- you can see in the picture above it's  in three parts that 'fold' into each other on the squeeze. With each pull, the trigger fires a dart and advances the barrel to the next chamber, with the dart leaving once the trigger has completely folded into the last piece.  This does away with a cocking mechanism, and on full trigger pull, you can really hear the very dense "thunk/click/boing" sound of the dart firing. Or maybe it's my finger snapping:P

While in theory this is an innovative idea, in practice it becomes ridiculously uncomfortable, especially if you're a small child or have small child hands such as my own. The trigger is much bigger than any other Nerf blaster and requires some effort to pull it all the way back; my index finger was fully extended and barely reached past between the trigger and trigger guard with my first joint. The firing mechanism requires the trigger to be completely pulled in (that's when it connects or 'snaps' for the dart to fire) so in a flurry of semi automatic firing madness, you can easily get caught out with a half assed pull:P


After a full 8 rounds fired, my finger wasn't very happy with me, and after reloading it several times, my hand in general basically told me where to go:P A friend of mine with very small girlie hands (being a girl) couldn't fire the Snapfire 8 on Power mode with one hand- she needed both and she basically handed it back to me and said 'I don't like it'. This is definitely NOT an ergonomically friendly blaster, and dual wielding them, while technically possible is not going to feel fun in your weaker hand. I'm sure with enough practice and training it'll be fine, but for me thus far..i'm with my friend on this one- it wasn't comfortable.

Performances are a mixed bag- I had better results with the Elite darts than with the actual Dart Tag darts, but I found the ranges weren't very impressive at all with dart tag darts, being more reminiscent of Dart Tag pre blue trigger enhancements. That being said, I was pretty happy with it using Elite darts?

The difference between the speed and power settings was noticeable but wasn't THAT great in performances (but quite a bit in ergonomics) and I also found it quite inconsistent- sometimes you'd get a great shot out and others a tad more on the dribble side. The new improved Sharpshot  better ranges from my test shots done to date. Because of the trigger mechanism is so stiff and requires it to be completely pulled to fire, you won't be able to pump out darts as rapid as a Barricade or Hailfire.
I really wanted to like the Snapfire 8; it has definitely been on many people's watch lists (including my own) since it was announced but I just found it rather disappointing The speed/power thing was a bit of a gimmick in my book, and the general firing mechanism was just too uncomfortable (which is sad because the blaster as a whole fits great in the hand when you DON'T need the trigger!) for it to be a truly awesome pistol.

It's design makes it difficult to pocket or holster, and while I wanted to think I'd be dual wielding these pups in full John Woo style, in the end the erratic performances and awkwardness of the firing mechanism just left me thinking no- long time play makes my index fingers feel like they've been sawn in two. It's a novel idea and as always, if you can get one for cheap, sure do it, but I'm not sure it's going to be a game changer any time soon. I don't hate it; I just think it wasn't quite what I was expecting and perhaps my expectations were too high- happy to hear your thoughts on it if you've got one. 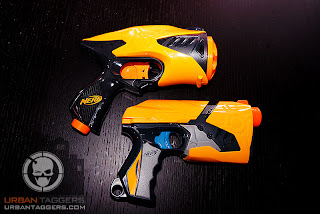 From what I know, only available in Singapore atm, and with shipping cost me around 40 bucks each so probably not quite worth it. I'd be waiting for a domestic release where it should be much cheaper. 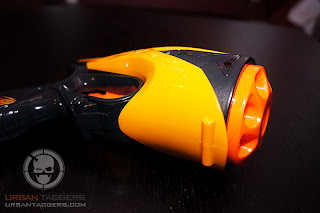