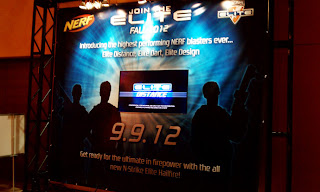 Well, if Urban Taggers is the blog that's in the naughty corner, Foam from Above is the dux of the school when it comes to Nerf:) They're very much the source of all things official and so it stands that the info provided below is all from the horse's mouth and pretty much legit.
Everything you wanted to know about the Elite series:
Foam From Above: Forever at Play: Nerf N-Strike Elite - info lowdown:
Posted by Pocket. Esq. at 09:57