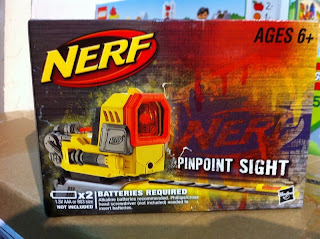 Sooo..we got a box of Pinpoint Sights sitting here from Hasbro Australia and I think it's time to move them, don't you? Sooo.. it's giveaway time! Want a Pinpoint sight? Read on...


For the rest of the year we'll be giving away one of these much coveted Nerf Pinpoint sights away EVERY month to the lucky reader who provides us with the coolest photo or video of someone they know, who would not traditionally be considered  a toy gun fan actively using an identifiable  Nerf/Airzone/Buzzbee/Maxforce/X-Shot etc blaster.

This could be a photo of your grandma, your school principal, the captain of the football team, your baby sister, a parking inspector, hell even a famous person- in fact the more random or crazy the pic is, the more likely you'll be a winner! Get them to pose with a blaster- or even better, show us you've converted them to the joys of water fights and foam wars and you could be well on your way to winning yourself a Pinpoint Sight! Remember these bad boys are not available for purchase in stores atm so this would have to be the easiest way to get your hands on one.

1) Yup.. It's worldwide. Wherever you are- you provide us with the coolest photo or video for the month as judged by us and we'll send you a Pinpoint sight. The contest will go till the end of 2012, thus allowing for SIX Pinpoint sights to be given away for these competitions. A runner up prize for the next best photo or video will be granted; the runner up will receive a Nerf Jolt IX-1.

2) This is a game of skill. You are required to take a photo or video of someone posing with an identifiable toy blaster. These photos or videos should be emailed to urbantaggers@gel.com.au or uploaded to facebook.com/urbantaggers.australia.  By entering you allow us to publish your photos/vids on Urban Taggers and our Facebook page and potentially use images for marketing and promotional purposes.

3) Photos and videos must have been taken and shot by YOU, and within the duration of the competition. No old footage or photos from the ol' photo album. Please be honest.

4) The start date of each contest is the 1st of each month, with the end date being the 28th allowing us 2-3 days to assess and judge. For example- July's Pinpoint sight contest will officially begin on the 1st July, and end on the 28th July. August's will start on the 1st of August, and finish on the 28th August. Do NOT submit photos during the judging period (29-31st) as they will not be accepted- give us time y'all!

5) You can enter as many times as you like. Miss out- well there's always next month!

6) Just to make it interesting, at the commencement of each month's competition, there will be a word/item that will be announced on Facebook/urbantaggers.australia , Twitter.com/urbantaggers and Urbantaggers.com. This word/item must be featured in your photo or video to be eligible for that month's contest.

So for example, if the word was say "camo" then I could submit this photo of my God son: 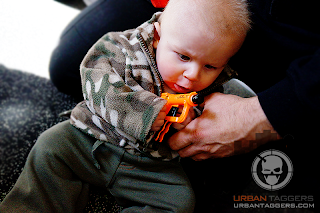 I wouldn't win of course, because.. well I can't enter my own competition:D

Clear as mud? Awesome! You've got a few days between now at the 1st July to get any questions in and I'll try to answer them as soon as possible. The word/item will be announced on the day. In the mean time- get your cameras out and start thinking- it's time to convert the rest of the world to toy gun bliss!
Posted by Pocket. Esq. at 10:20