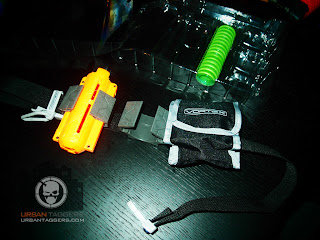 As many of you will know, the new Vortex Pyragon recently got me all excited again for the Vortex line, so this new Vortex Ammo Belt Kit was a natural purchase for us. Sort of the counterpart to the Bandolier Kit for N-Strike, this set features two Vortex ammo clip holders and a pouch to keep your XLR discs, all in a nice neat Batman style belt. It's pretty cool, but it isn't exactly ready to go out of the box. Our thoughts after the jump. 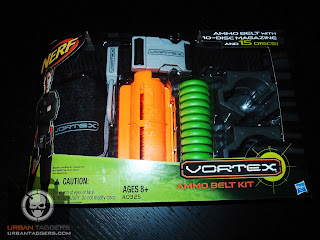 The Ammo Belt Kit comes in a slim packaging with a large plastic window showing you the contents inside. 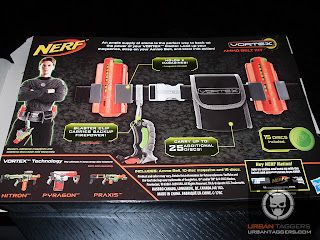 There's no manual inside given it's not that complicated to work out, so the instructions are all on the back. 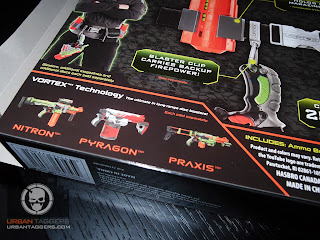 Naturally it plugs the three main Vortex blasters it is compatible with (Obviously the clips will fit the Lumitron, but then it.. sorta no longer is a 'Lumitron' any more is it?:P) and gives us hope the Pyragon will be out here in Australia this year:) 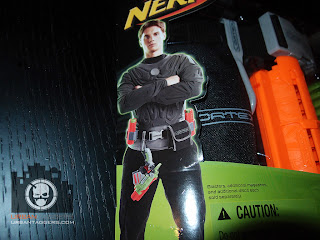 I kind of laugh at the earnest looking fella on the box with his backup sidearm Proton slung by his crotch... if the guy has to make a quick getaway, I predict him causing himself some pain.. usability fail there:) 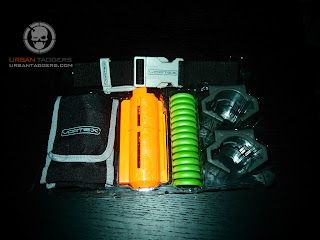 Open it up and you can see what you get- the belt and belt clip fastener, a ten round clip (the back of the box shows two, but given you can clearly see inside the packaging theres only one I guess it's not REALLY being misleading), an XLR disc pouch, a plastic carbine thingy to clip a small side arm to, two clip holders and 15 discs.

It's kind of a weird combo. "Here, have TWO clip holders but only get ONE 10 round clip but we'll give you..an extra 5 discs making it 15...and a pouch that can hold..probably double that amount... and a carbine clip to attach a blaster that.. doesn't need a clip!" Go figure:)

The belt itself is made for a child, or a slim adult man. I'm a 32" waist, and it fits me with not a whole lot of room left- I think it'd be ok if you were a 34" but you're starting to push it a lil if you're waist is any bigger than that. You could however go to your local Lindcraft/sewing/fabric store and just buy yourself enough of this strap cord, or even attach the bits to another belt, but just be warned that out of the box- it ain't for larger fellas. 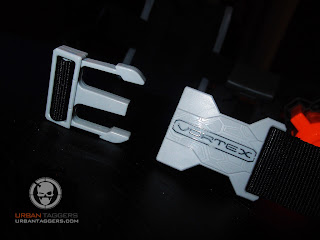 The belt uses the standard plastic clip connector style as seen on bum bags and backpacks. You kind of need to remove them off the belt cord anyway to attach the clip holders and disc pouch- these aren't attached in the box so it's very DIY and you can play around with the order you want your kit.

The pouch is pretty nifty, but as we said earlier, it's definitely got more room in it to take more than 15 discs. It's a soft bag that could fit in N-Strike clips, or a camera or phone, or a few muesli bars.. and it's made to expand a lil to fit the discs flat vertically. 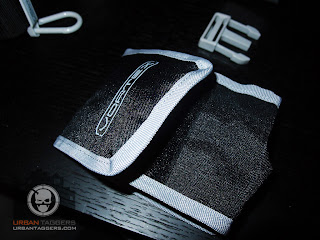 The pouch has a belt loop behind it to attach to the belt through. It fastens with a fold over flap and some velcro. 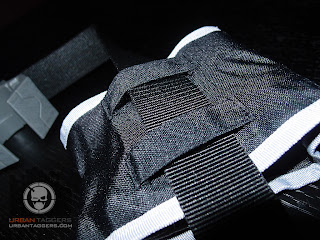 The belt also comes with a carbine loop to attach a 'side arm' to but personally, I find that gets in the way and bounces around a lot. I'd probably be more likely to attach.. ok well nothing as it's just going to bang against my hip/leg/ other parts.. 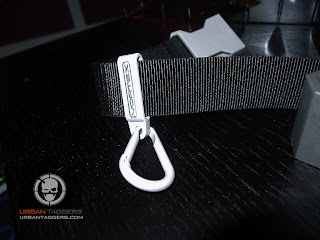 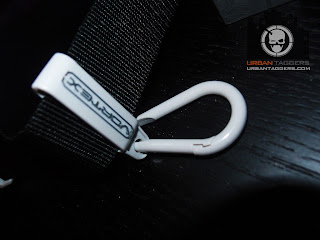 The two clip holders are moulded to fit the clips securely. You just slide them in from the top until it catches on the grooves on the side of your vortex clips. Fits all of them; obviously the 20 round capacity clips stick out some.. obviously the 40 round drum REALLY sticks out lots and bangs into your armpits a lots AND you have to stick it in upsidedown so I'd suggest.. no on that particular one.. 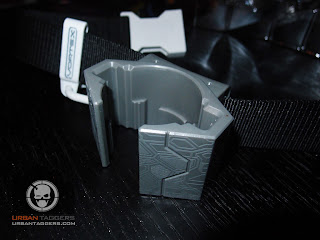 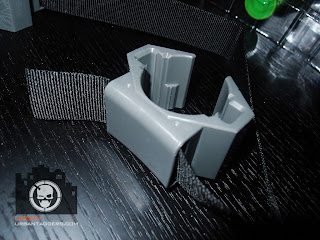 Clip holders feed in through a belt loop at the back as well. Get yourself any thin cord/beltand it should be fine. 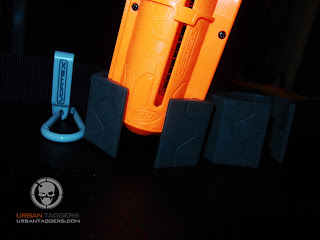 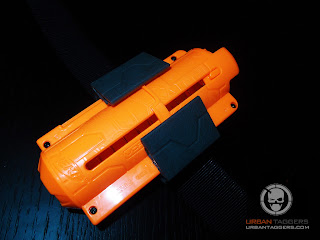 The clips are pretty secure and can only come out from the top, so they are ok to run around in, but they do stick up a lot so it takes a bit of trial and error to work out the best position on your waist for them without them jabbing into your sides. 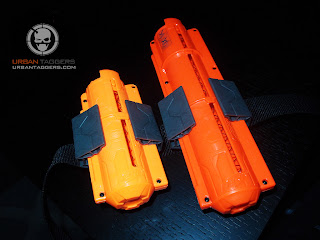 For some reason the clips that come with the Ammo Belt Clip are a different orange plastic to those that come with the Nitron and Praxis. This sorta urks me as it kinda clashes a lil with the blasters- and I can't think of any logical explanation for this.

For 15 bucks its a pretty decent piece of kit. Up until this point, carrying around Vortex clips has been a bit of a pain in the butt given their shape, and the Ammo Belt Kit does keep them pretty secure. Get yourself another and you can do the Batman thing and have four clips around your waist, although you won't be bending over to tie your shoelaces in a hurry:) I find the carbine thing to be unnecessary but the ammo pouch is pretty useful and well made. I like it, and think if you are a Vortex fan then it's worth getting yourself one of not a few; just be prepared to take the time to put it together the way you want it. And if you're a big guy- I guess get yourself another replacement belt or lose weight?!
Posted by Pocket. Esq. at 00:52