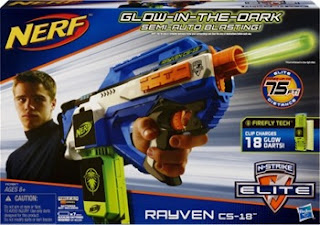 Spotted on German site "Soundmedia.ch" was a boot load of upcoming Nerf gear- much of which we've covered but I thought this was something cool- box art for the upcoming Elite version of the Rayven-CS-18- updated colours for the blaster and clip.

I find Nerf's product strategy a tad... confusing. While the Retaliator was essentially the Elite version of the Recon CS-6, and the Rampage was the Elite Raider, here we've got an Elite version of the Rayven... called the Rayven, AND featuring essentially the same box art imagery only with the Elite branding layer over it. I assume the original N-Strike Rayven will be replaced by this, as if it's not, I'll guarantee toy stores are going to get very confused very quickly. Given it's an Elite Rayven, I'd assume it'll have a similar spec to the Stryfe.

In any case, I do like the Elite colour palette so bring it on!