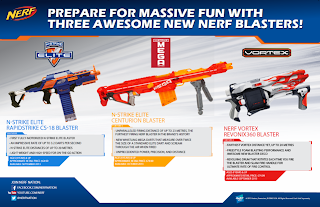 We received the official press release from Hasbro Australia this morning regarding the three main new releases for 2013. It's pretty much just reiterating intel we've already discovered over the past few months, but at least it's from the horses mouth:)

Launch a long-range assault with this incredible high-calibre Centurion blaster! This N-Strike Elite blaster features bigger darts that are engineered to fire farther than ever. Attach the bipod stand for even more accuracy and load up the MEGA Clip with your MEGA Whistler Darts. They scream as they fly! With a range of 30 metres and 6 MEGA darts, you can push the boundaries of your marksmanship. Amp up your sniper cred with the Centurion blaster! The Centurion blaster is a long-range blaster! Fires MEGA darts 30 metres! MEGA Whistler Darts scream as they fly. Includes 6 MEGA Whistler Darts. Load the darts in the MEGA Clip. Includes removable bipod stand for precision targeting! Blaster comes with 6 MEGA darts, MEGA Dart clip, removable bipod stand and instructions.

Amp up freestyle foam blasting performance with the NERF VORTEX REVONIX360 blaster which achieves the farthest VORTEX distance yet, up to 20 metres! This disc blaster features new, awesome deco and has a revolving drum that rotates each time you fire the blaster.Plus, the SLAM FIRE Handle gives you total control over your rate of fire – blast a single shot or hold the trigger down and slide the handle repeatedly to unleash an unstoppable stream of discs.Includes 30 multi-color XLR discs. Available at most major toy retailers nationwide.

Turn your N-Strike Elite blaster into a battle cam with the Battle App Tactical Rail Mount! Download the free Nerf Battle app to your iPhone or iPod Touch and then attach your device to your blaster (devices and blasters sold separately) with the Tactical Rail Mount. Now you're ready to review mission briefs, activate the rangefinder to gauge the distance to your target, and even record the battle, all from your blaster!

Battle App Tactical Rail Mount accessory lets you mount your iPhone or iPod Touch on your blaster (devices and blasters sold separately)! Download the free app and complete N-Strike Elite missions! Review mission briefs. App has a rangefinder that gauges the target distance! Record your missions!  Includes Rail Mount accessory and instructions. Nerf and all related characters are trademarks of Hasbro. iPad, iPod touch and iPhone are trademarks of Apple Inc., registered in the U.S. and other countries. Ages 8 and up. Note: This device is not intended to provide protection to the iPhone/iPod touch. Hasbro is not responsible for damage to iPhone/iPod touch. Blaster does not charge device. Adult assembly required. No tools needed. © 2013 Hasbro. All Rights Reserved.

Hasbro is not responsible for any content distributed through the App Store, except for Hasbro-generated content. Please refer to App Store terms and conditions for further information. Please note the only place this product will be available is Toys R US and they have a small allocation of 600 pieces that will sell out fast. Free App will be available globally on iTunes from 1st August 2013.

There are no plans for Android at this point of time.

The app will be available soon globally on the iTunes store from 1st August:

• Battle Camera Display – Active targeting screen with features to help you while you play. Camera controls let you record video or photos of the action. Zoom function lets you zero in on targets. Rangefinder helps gauge distance to your target. Compass keeps you on course.
• Missions – Guides provide different ways to have multiplayer Nerf battles.
• Record your Battles – share them with friends.
• Arsenal – Check and Track all the Nerf N-Strike Elite ™ blasters you own.
• Hand Signals – See the guide for ways to silently communicate with your squad when you play.