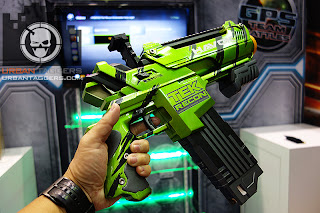 Following on from my earlier post about the dominance of Nerf and its foam dart stranglehold, imagine what it'd be like to make the gutsy move of developing your own brand of blasters in an already saturated market. What would you do? How would you go about it? It got me thinking as it's often a point of conversation regarding "what would I do if I wanted to design the ideal blaster?" and while most of us just talk about it, sometimes some people are awesome or crazy enough to actually do it. While I was writing the previous post, one line kept ringing in my head- an alternative to Nerf that may just have the goods to be a game changer in the toy blaster market.

Tek Recon is the new kid on the block; well they haven't even moved in yet but the anticipation and buzz behind this new line is pretty positive thus far and better than anything I've seen in the time I've been blogging for an alternative blaster. Considering all the blaster lines in the past that have come and gone, how successful do you think Tek Recon will be?
As a new player, I have to say Tek Recon have done a pretty good impressive job generating positive hype to date with minimal marketing budget. So what have they done right so far that has inspired such interest? 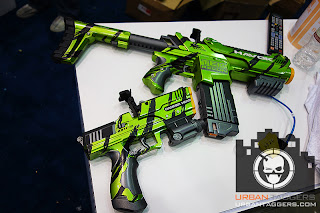 Firstly- form factor- they look INCREDIBLE. Non Nerf blasters are notorious for being poorly made- cheap plastics, rattly casings and gaudy paint schemes. The Tek Recon Hammerhead and Havok (in fact ESPECIALLY the Havok) are good looking blasters and from the images and my experiences with them in hand they look pretty solid and well built. There's a lot of detail and personality to them and they have enough aesthetic win here to keep our interest with semi realism in their designs but also with a modern futuristic feel to them. The design is a winner.

Performance- Tek Recon ranges boast over 75 ft which is about where fans have now set their expectations as what is considered a "reasonable" distance. They shoot pretty quickly with clip fed ammo- and fans like using clips:)  While this is a bare minimum to survive in the current blaster climate, it's desirable to achieve greater distances but given the likes of Max Force and Xploderz surpass this and still don't get fan love, I personally don't think this is a big deal. 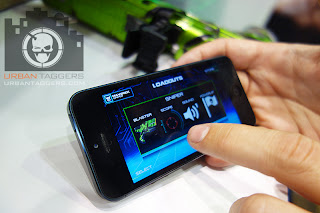 Innovation- Here's where it gets a lil dicey- Tek Recon are using the much overused "real life video game" tilt- We've heard it from Laser tag lines like Battle Tag and Light Strike and watched them.. well kinda fail miserably. We've seen just how underused and disregarded Hasbro's augmented reality cradles for their new Lazer Tag lines are and how they're chalked up as a failed gimmick. AND we've seen other Kickstarter funded gear like App Tag (and I REALLY wanted to like these) have struggled to get kudos. Tek Recon have said they're looking to use the apps to be more inline with actual game play rather than just shooting imaginary cartoon bugs. Even with fan scepticism that bringing in online features is just a big fat gimmick, Hasbro haven't given up on it either and are adding these features to their upcoming Nerf blaster lines.SO not only are Tek Recon banking on a feature that's already a lil "how you going" for the community, they're also directly competing with a similar product released by the market leader! risky? Probably.

The way I see these apps effectively working is to make them a part of the blaster experience; using them for targeting, providing genuine environmental data such as when you're closing in on opponents/targets or when they're closing in on you, camera, gps maps and genuine communication between team mates. Sure it's no doubt fiddly but these are features that would enhance the blaster experience. Shooting cartoon bugs kinda doesn't. And.. Tek Recon delivers- all of the above is what the app is about. They're the closest I've come to thinking "hmm, I want this app" yet:)

The blasters themselves are pretty innovative in themselves. Semi auto fire, dual mechanisms to shoot with large capacity clips and no need to prime? Ability to alter the tension to allow for faster firing vs longer distances? Awesome. 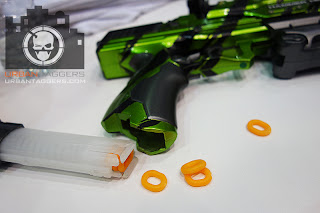 Ammo: Where everyone falls:( Like I've said earlier, everyone's a foam addict. Why foam darts are so much more appealing than anything else, I do not know. Even Nerf's Vortex series that resulted in faster further, more accurate firing capabilities with well made XLR discs have still be considered to be the N-Strike Elite series' awkward brother and that's coming from the Nerf stable- how do we feel the fans will take to "rubber band" ammo? Disposable ammo such as gel balls or spit wads haven't been readily adopted, but will we see brightly coloured loops lying around all the house and yard? The main thing is they hit the distances, they seem pretty accurate, and they're brightly coloured and can be found and reused. They should work equally as well both inside and out which gives versatility.

Marketing:  Massive kudos here. If you're a small up and coming company looking to break into an already saturated market with a clear leader, you HAVE to be think differently to the rest. Tek Recon have been a poster child on how to use social media effectively- from engaging with community bloggers such as ourselves, to being as transparent and open about their kit and genuinely listening to their followers in the actual product design, you've got an already established and growing community WANTING to see them succeed.  They update their social media regularly and respond to readers and actually learn from the community rather than just assume they know and tell the community how it's going to be. They've brought fans along for the ride from the very beginning and been very humble and friendly in the process (maybe its because they're Canadian!)

That all being said- retail's a fickle thing- we're only speculating, and there's no real way we can really know how successful Tek Recon is going to be. But at this stage, all I can say is everything they're doing seems to be working. We're not easily won over on new products and pride ourselves on being impartial- I'm still sceptical of the whole smart phone app integration but despite that I am genuinely excited about getting my hands on the Havok and Hammerhead as soon as possible. I think Tek Recon have a lot of things going for it- fingers crossed!