Rant: Where do we get our blasters from?


It's almost on a daily basis we get asked the same question: How do we get our blasters so early? We've actually answered this question before, but maybe it was all a little cryptic so I figured I would dedicate a nice big phat post on the whole thing to finally put this question to bed once and for all.

Right off the bat, I have to admit we thought some of the theories our readers came up with were pretty creative and novel, and a part of me wanted to keep the mystery going and fuel the rumour mill for funsies, but then I started hearing of some pretty nasty negative comments from others in the "Nerf community" which suggested I was partaking in illegal activities to acquire our gear.

Are you serious? If I was going to steal something, am I really so stupid that I would post it all over the internet for all to see? Illegal Nerf black market? WTF? (I spoke to one of my close mates about this who's a cop and she laughed at me and told me to come down to the station where all the other cops could hear my tale and laugh in my face)

Anyway.. so here it is- the anti climatic answer to how we get our blasters early: The truth? We put in significant amounts of effort using Google and email:)

Understand this folks; we live in Australia where we get nothing new. We're not even a blip in the radar when it comes to distribution down here so if you're a Nerf fan in the land of Oz, traditionally you'd have to wait for ages for things to appear in our stores here, normally a season or two late, overpriced and under stocked. 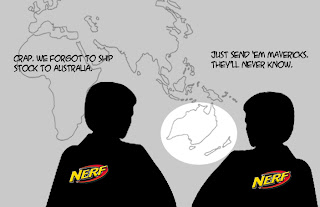 Now we can sit back and whine about it.. Or we can do something about it.  Ever since I discovered internet shopping, I've always been relentless in acquiring gear that I wanted, even if it wasn't available at my local Target. The internet is wonderful for this sorta thing; because with Google, some determination (and a wad of cash helps) and a bit of luck, you can find someone who'll sell you whatever it is you're looking for. Sure it might be expensive, but it's all about willingness to pay. It'll probably be dearer than if you buy it at your local Big W.. But if you want it.. The avenue is there.

If you want to sit back and wait for things to come to you, that's fine but then you probably shouldn't be asking why is it you didn't wake up in the morning with a new Swarmfire on your front door step. All we did was Google a helluva lot to find suppliers who might sell them (often through eBay) and build/maintain relationships with key suppliers world wide.

Every time I've ever bought something online, I like to keep pretty good relationships with the sellers. In turn, they tend to let me know when they hear things that are in the toy blaster world, and if they can get their hands on anything rare or new, they'll let me know. Next time you get something cool from eBay, try writing them an email for a change to thank them for the transaction and to keep you in the loop if anything else should come their way. Next time you go into an independent toy store overseas, try talking with the manager and asking them to email you if they get anything new. If you were nice enough, often they just might take you up on that offer.

While it's nice that the jealous and the nasty suggest conspiracy theories of me acquiring them illegally/stealing them etc, it's just NOT. THAT. Sexy. The past 3 months have had every other US Nerf blog gain access to products before us, and I don't cry foul and suggest they're stealing things or a part of a black market ring.

Also do understand UT isn't a business. Every blaster we have, we pay for ourselves independently- and we end up paying considerably MORE for these newer blasters just so we can get them, photograph and review them for you guys to make your own decisions on whether you want to buy them or not. (more than happy for someone else to pay for them and send them to us to review, but that just doesn't seem to happen!) We don't have any advertising on the page or get any kickbacks; so we actually have nothing to gain from the whole process other than trying to get information out to our readers.

SO there it is folks. Next time I can always try to jam a Stampede down my pants and do a runner outside of Target if that'll make for a better story:)
Posted by Pocket. Esq. at 01:03

Email ThisBlogThis!Share to TwitterShare to FacebookShare to Pinterest
Labels: Rant