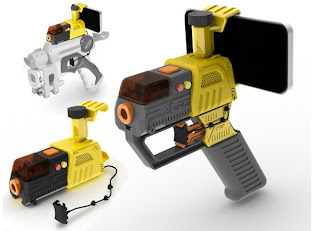 One that hails from Australia- check this out. It's called App Tag, it's to be released in June, and it's essentially laser tag using smart phones (not just iphones). The best part about it- it can pretty much attach to any toy blaster, meaning you can use.. pretty much whatever piece you want:)

"AppTag Laser Blaster brings first person shooter console gameplay to smartphones in the real world. Obviously, as with any blaster toy, the object is to shoot your friends! The AppTag does the shooting and the smartphone keeps score and tracks everything else, the App even adds Augmented Reality objects such as medkits, armour, weapons and ammo packs!


For targeting we use a focused infrared beam and sensor for the 'laser' so it's totally safe. Each unit has an IR sender and receiver, and the AppTag unit works together with an attached smartphone or iPod Touch."


Their official Kickstarter page is here, which means you can help fund the project AND get yourself some units when they're released in June. Dowit.