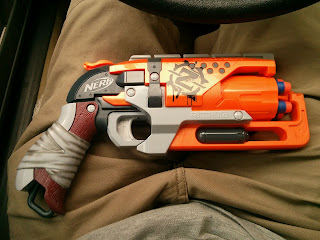 We've talked about how the stricter safety standards of certain countries (like Australia) have resulted in a grey trigger for the Elite series of nerf blasters, but it looks like the design will be extended to the other upcoming lines too. Here, spotted on Baidu is a grey triggered Zombie Strike Hammer Shot. Other than it being of a person's lap/crotch, it's a really nice high res image of the Hammer Shot:)

What's interesting is I've started to see sales on Taobao of N-Strike Elite gear where you can CHOOSE whether you want an orange trigger or a grey trigger- grey being cheaper:) Not really a big deal if you're going to mod them anyway:) 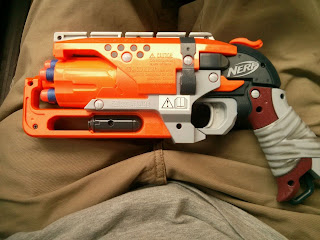 Cheers Randomshadow09 for the heads up!