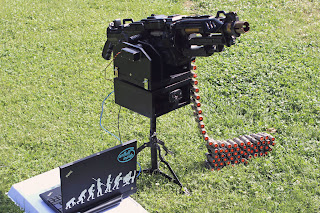 There's something about the Nerf N-Strike Vulcan that just lends itself to being modded. It's big and awesome and still gets the "OMG" reaction from non-nerfers to this day, but it's never really the primary blaster of choice for most players due to it's size and relatively slow reloading mechanism (that and no other blaster in the Nerf line uses the belts). The Vulcan's bulk and the fact it even comes with a tripod suggests it's made to be stationary- and in turn it tends to be the blaster of choice for engineering types who want like tinkering with electronics- and build cool stuff like.. oh I dunno.. automated sentry guns:)

I've seen several varieties- however this one from Instructable user Brittliv is the latest and perhaps one of the more advanced ones I have found with not just motion sensor tracking, but also the ability to differentiate between friend or foe by.. what they're wearing:D Video after the jump. Awesome:)