Ok, Straight off the bat- I'm a completionist so no doubt I'll end up with all of the new Zombie Strike gear, no question. Nerf, you have my money. However, after a few hours and some sleep in between my 4am post on the new Zombie Strike kit, I've managed to sit down and really look at this new line up a little more carefully, and I have to concur with a few of the comments already made by some readers that there's something about the release of these new blasters that just doesn't quite sit right.

And so I think it's time for a good and hearty rant piece:)


For me, my initial response to the Zombie Strike line was that it was a nod to aesthetic modders- So much of the styling is already done already and this was Nerf's attempt at creating a role play universe per se that these blasters belonged. It's like up until this point, Nerf was about blasters themselves and fans were left to their own devices as to whether they were going imagining realistic style mil sim, sci fi futuristic aliens, steampunk or whatever with their games. Now we've got a line that actually suggests the world where they belong-  these are used against zombies, with blasters that look raw and makeshift almost in their aesthetic design. Zombie apocalypse? hells yes:) 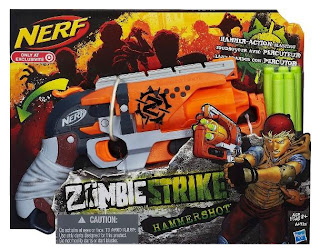 What was also interesting was bringing out a relatively "grown up" theme to blasters as well. Zombies traditionally are in the realms of horror- they're the walking dead and they're supposed to be scary and therefore something your standard 8yo kid is not supposed to be exposed to. Not any more:) Whereas before official marketing has shied away from adding any form of conflict or parallels to real guns, this is the first time I can think where they've officially acknowledged Nerf as being about shooting at someone- even if it is something that's already dead:)

And it's purely a role play thing here, because as much as formalised games like HVZ are all about zombies in theme, as far as a game is concerned, it's all about bootloads of firepower, which none of this line actually have. There are no 35 plus drums here.

When we first got word of the new Zombie Strike blasters, the first thing that really stuck out for me was their original styling; they actually looked faux post apocalyptic:) The "bandaged" hand grips and rough looking designs were pretty novel in the Hammershot, and they continued on with the Sledgefire. The types of blasters they were also fit in with that neo-western feel that we always associate with zombie apocalypses and we were also seeing all new firing mechanisms with the Hammershot being hammer cocked (and in turn able to be dual wielded) and the Sledgefire with shell holders and firing 3 darts at a time. Original designs, new firing mechanisms, consistent with theme, all and all, and enthusiastic two thumbs up from the UT stable.

Now this 2014 lineup.. well I dunno. It seems to be the upcoming new gear is a different beast entirely and seems to go against this completely. At first, the first thing you see is "OOH CROSSBOW" and yup, that fits into the zombie world we know and love like a glove, and so I think that was what pretty much set the tone for excitement and interest of the new line until after a few more glances and I was "err hang on.." 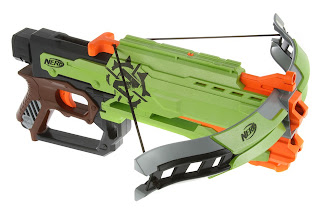 So let's talk about said crossbow, or the official name of it being the Zombie Strike Crossfire- it's pretty awesome looking. I mean, I love it, I want it, it's cool, as I've said earlier- crossbows are the new black. It pays homage to the old school crossbow by firing darts rather than big foam arrows (and they even mention it in their press release with the "iconic crossbow action to the Nerf line for the first time in almost twenty years) and it actually looks like they've designed it as a crossbow in mind, as opposed to a blaster that they just stuck a crossbow head and string. What is different however, is its styling doesn't look as in line with the Hammershot and Sledgefire, and as noted by My last Dart, appears to feature the mark of N-Strike Elite in the grip, suggesting this blaster was originally designed as an Elite blaster first.

It's got the stock attachment nub at the back, and it doesn't have the faux bandages around the grip; the green and orange and grey make it almost look like a Vortex blaster! Bottom line- for ours it looks more "polished" and less post apocalyptic than its previous Zombie Strike peers. An N-Strike Elite repaint perhaps? (can it even be called a repaint if it's never been painted as an N-Strike Elite blaster in the first place?!:P) 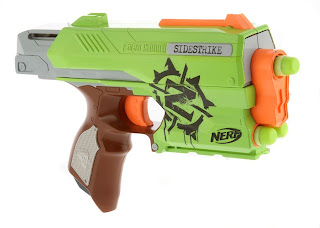 The other new dart blaster in the Zombie Strike lineup is the "Side Strike" and it's a single shooter, sort of like a re-imaging of the old N-Strike Scouts. It also features the N-Strike Elite logo in the grip and has no faux bandages and again deviates from the post apocalyptic styling of the original Zombie Strike blasters. In fact you could easily release this in N-Strike Elite blue and it'd look right at home. I do like the tactical rail at the bottom of the muzzle, but it makes no sense for it to be for a front grip, so here's hoping Nerf bring out some light accessory that'd be at home in this position.

An interesting marketing/design move is to introduce Vortex into the Zombie Strike lineup; Vortex for me has always been sort of sci-fi futuristic and I always saw the XLR discs visually emulating laser beams, so bringing them into the post apocalyptic neo-western front seems like an odd decision. These ones for me look like a blatant repaint of what look like were to be originally part of the Vortex black/white and red schemes. Their designs are very much similar to the Diatron and they look way too high tech/futuristic for the world that the original two Zombie Strike blasters have sort of presented. They also have no visible tactical rails, no faux bandages and all and all nothing to say they really belong in this space. 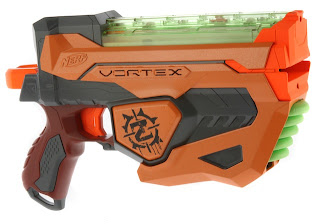 That being said, appreciating the blasters themselves, I do really like the Fusefire's chunky design and its continuous firing mechanism is pretty cool for easy reloads (hopefully on the fly). The discs on these are said to be 'glowing'  but there's no mention on batteries like a firefly unit but that transparent bar on the top might be for lighting them up. The Ripshot and Ricochets look like glorified Protons being single shot and for me nothing exciting.

Finally there's the N-Force Blade. As a sword, it looks pretty. I like the design though again, it looks like it's a repaint of something that belongs in another universe (Thundercats? Voltron? just something else!) other than zombies. When I think of blades in Zombies, I think of machetes, or axes, or knives or even cleavers and baseball bats but not really full length swords. 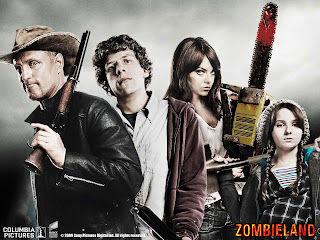 Maybe Nerf are creating a new Zombie universe for these blasters to sit in- but on closer inspection, it does seem to be that the Zombie Strike Hammershot and Sledgefire were designed by a different crew to the rest of the lineup. All of the points for originality and difference for those bad boys unfortunately go a little begging in the new gear. If this had been through Baidu leaks, we might have said "these are pre releases" or "prototypes" and cross our fingers for the final product, but this is official word from Hasbro, so it's looking like this is it.

What's important I guess for blaster fans is there are new units coming in the foreseeable future, but as far as a theme to tie them all together, it seems somewhat disjointed. Of the 2013 lineup I really like the Hammershot and Sledgefire, but as far as the 2014 line is concerned I just wish they'd maybe taken a bit more time with the release and made them more true to the zombie theme.

Still, there's a lot of new gear to be had, and oh yes.. I shall have them:D

Note- Official word from Hasbro Australia- Hammershot and Sledgefire will be released October 2013 in Australia, with the 2014 line TBA.