The Nerf Spectre REV-5 is a much anticipated upcoming blaster (by Australian standards) from Nerf's the new 2010 series; along with the Alpha Trooper CS-18 and Barrel Break IX-2. It's a very sleek and sexy number, with a revolving barrel that accommodates 5 rounds and additional accessories like a "silencer" barrel attachment and a folding stock. We reviewed the Spectre over a month ago, but for those of you who want more.. 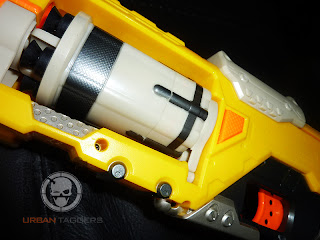 Q: Isn't the Spectre just like a Maverick but with less darts?

A: From first glances, sure. But on closer inspection, in my opinion the Spectre REV-5 is quite a different blaster to the Maverick. Aesthetically, the Spectre is quite flat, and even the barrel is angled so that it sits square on a table (or in the above case, my couch). While it's of a similar size to the Maverick, it is sleeker and leaner.

Admittedly yes, it also "sacrifices" one round to be only 5 rounds compared to the Maverick's 6, but I personally don't think it's that much of a big deal. Pressing an angled orange button on the left side of the blaster releases the barrel to load it with darts; it comes out all the way unlike the Maverick which looks pretty cool.
Q: What does the Spectre come with?

A: In my opinion, putting all the attachments on the Spectre do make it quite "long" and almost unwieldy. As I've said in previous posts, adding a stock promotes two handed use of the Spectre, but there's nowhere really to grip onto under the barrel. I don't really like the look of it either with the stock attached- it looks kinda cool when the stock is folded, but then that sort of defeats the purpose of having a stock in the first place?!

The "Silencer" attachment silences nothing and doesn't do anything other than maybe look cool. I don't personally see any dramatic performance decrease with the silencer ON, but in theory it would affect your ranges; it adds unnecessary length to the blaster which makes it clumbsy for quick wars. It DOES look cool though:)

Q: How does the Spectre's folding stock compare to the Recon's?

A: The folding stock is surprisingly quite sturdy given it's thinner than the Recon stock and..it folds. It attaches to the base of the Spectre with a small clasp not unlike attaching stocks to other blasters like the Recon + Raider. Personally I really like it.. just not on the Spectre:)
It uses an interesting sliding mechanism to lock it into place- whether you want it folded up, or extended out. Just follow the diagrams:)
Once it has been secured in either the folded or extended positions, it's unlikely it will unlock and cause you any issues. The mechanism is quite ingenious and works well. Even if it does looks sorta silly on this blaster. 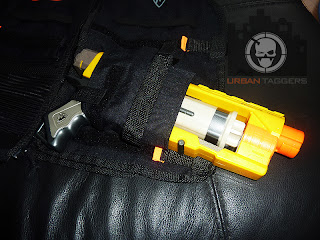 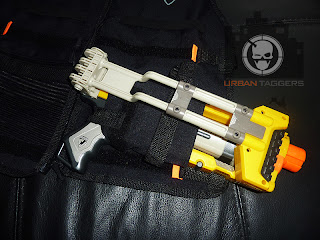 Q: How easy is it to operate the Spectre?
A: The Spectre REV-5 has a streamlined cocking mechanism on the top of the blaster. It's got a small lip on it to grip onto so your fingers don't slip. The cock is spring loaded, like with the Maverick(as opposed to the Recon) so it's a matter of just pulling it back and letting it snap back into place.
The primer also sits behind the tactical rails, unlike having the rails on top of it. I prefer this, as having the scopes on top of the primer tends to get in the way and I worry I'll snap them off in a mad priming flurry.
An issue is the hand grip of the Spectre IS very short- most adult hands will be too big for it which has been a complaint vs the much more comfortable to hold Maverick.

Q: What about the scope for modding?

A: As always again it's not my thing but I've heard if you can mod a Maverick you can do one of these. Maybe check in HERE for more info.  At least the barrel comes out all the way so you don't need to do that mod.. 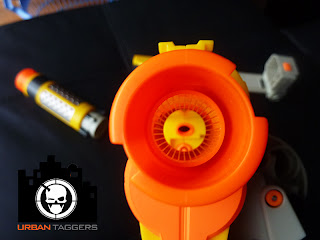 Q: How big is the Spectre?

A: I've temporarily lost my tape measure and rulers atm (ok..the gf took them back) so I can't measure it up RIGHT at this moment. Weight though is just over 360grams. 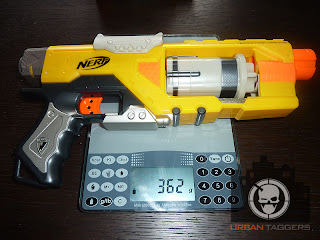 ﻿
Q: When is it out in Australia? Where can I get one?

A: I have no idea when it'll be available here. In the US, it's a Walmart exclusive and goes for around 20-25 dollars US, however it has been available in Hong Kong, Singapore and other Asian countries for a few months now (and they don't have a Walmart!) As always, if you want one bad enough, and you're willing to pay for it, they're always available online..somewhere.

UPDATE: The Spectre REV-5 works well with all of Nerf's dart range; I like using revolvers with sucker darts myself, but it probably performs its best with whistlers as I find they're the best weighted for this type of blaster. Streamlines work fine too but I generally keep them with the clips. (thanks Thorn for the Q)

Personally, I feel that the more I've gotten to play with the Spectre, the more I like it. I think it's a better blaster for me than the Maverick; it's sleeker and easier for me to wield personally due to my small hands. I like the way it looks better, and the placement of the tactical rails on the front of the blaster rather than on the cocking mechanism means better access to attachments. I really like the Spectre..now:)
Posted by Pocket. Esq. at 11:54