The Nerf N-Strike Barrel Break IX-2 is an upcoming (by Australian standards) blaster that fires two rounds between each load, either simultaneously or one after the other. It gets its design cues from a sawn off shotgun and is although we've only had it for a few months (our review here), it's already become a firm favourite amongst us at Urban Taggers. Soo what makes it so cool and why do we like it so much?

The Barrel Break was initially our LEAST coveted blaster in the new 2010 N-Strike release range, being able to ONLY fire two darts at a time, and with what looked like an awkward reloading mechanism, I pretty much just picked one up because I could. Once out of the box though, it became pretty evident that the Barrel Break was unlike the other blasters. Any complaints of a reshelled Recon didn't apply here; it was a completely different firing mechanism that actually packs quite a punch as stock. And anyone who picked it up.. LOVED IT.
Q: How easy is it to load?
A: It's not "easy" per se, but it's nothing difficult either. The barrel is quite stiff and is locked in place- you need to press the release switch located above the trigger (there's one on both sides of the blaster depending on whether you're left or right handed)
Once you've pushed it down, it's a matter of sliding the barrel out from the clasp and then "breaking" it down. You'll  need to use a decent amount of force to "break" it in half so you can load the darts. There are two small arrows on the hinge of the barrel- you'll know the barrel has been "broken" correctly when the arrows line up.
If you don't break it all the way completely, the barrel will jam and get stuck. It takes some time to get used to, as well as quickly loading two darts in the barrels and snapping it shut. It's pretty satisfying when you do though.
Q: How big is it?
A: The Barrel Break is sizable given it does only fire two darts; however it feels very solid and can take quite a beating. It's around 45cm long from the base of the grip to the end of the barrel, and weighs 580grams with no darts.
Q: What about the tactical rail?
A: The tactical rail can accommodate all N-Strike tactical rail accessories, however it's really used up to carry the supplied dart holder. If you didn't want to attach it, I guess you could load it with a scope or anything else, but given the TYPE of blaster it is, I personally wouldn't bother.
Q: How about accuracy?
A: The Barrel Break might LOOK like a shotgun but as with all Nerf blasters, it fires just as accurately as any other blaster so if you aim it correctly, your darts should go where you want them to go. It's of course more fun to just point and shoot without the careful aim. Obviously you have two barrels to look down, not just one so the darts WILL be a little off centre.
Q: How powerful is the Barrel Break out of the box?
A: The new 2010 blasters all seem to pack a bit more punch than previous Nerf models, so I'd say out of the box it's pretty impressive with that 12-15 metres achieved by the Alpha Trooper and Spectre are similar with the Barrel Break too. 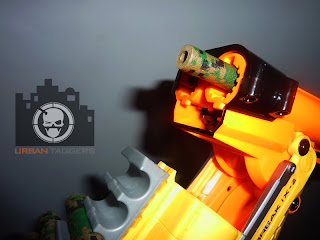 Q: Does it take all types of Nerf ammo?
A: Pretty much. It comes with whistler type darts, but as pictured I've used it with sucker darts as well. I generally only use streamlines with clip system blasters, but the Barrel Break CAN shoot them as well.
Q: How do you fire darts one after the other?
A: The Barrel Break has a half trigger firing mechanism; one half squeeze will fire the round chambered in the left barrel; press fully and you'll fire the right. If you press the trigger fully in one motion, both rounds will fire at the same time. Unlike the Buzzbee shot guns, there are no plastic round holders to fire out. (note- it is a little sensitive at times to get the "half" squeeze right- some Barrel Breaks are more sensitive than others)
Q: Could you dual wield a Barrel Break?

A: In theory, I guess but it's probably not the best for it. You definitely need both hands to reload the blaster. The fact it can fire one dart after the other means if you were, for example carrying two of them, you could fire four rounds one after the other before you needed to reload.. but then you'd be sorta stuck. Reloading does take longer than say with a Nitefinder, so you'd have to be running off a fair bit. You also cannot "snap" the Barrel break shut with one swing motion which means you need the other hand to physically close it.
Q: What about modding the Barrel Break?

A: Not my thing, but from what I can see it'd be a similar case of changing the springs and/or removing the air restrictors.


Q: Will it fit in the Tactical Vest holster?

A: NoYes, although the Barrel Break is quite fat and will technically fit in the Tactical Vest holster, without the ammo holder on the tactical rail. It's not the most comfortable blaster for this and the strap doesn't really come over the handle (thanks to CanadaNerf for this amendment) though.

A: It's just a really FUN blaster. It feels nice and sturdy in the hand, it looks tough and the mechanism to load and fire the Barrel Break is just all about role play and lots of fun. Everyone who picks it up straight away puts on the tough guy swagger/voice/both and it's one of those rare blasters that is fun throughout the entire process, not just the firing. It's actually fun to load the Barrel Break, to break it open, to snap it shut, even just to carry it. And it's different from the other Nerf blasters.

Q: When is it available in Australia?

A: The rumour was.. now. October was what Toys R Us apaprently said, but to be honest, Australia as we know is notorious for delays in blaster releases (Massive launches like the Stampede are an exception). It's honestly one of the "it'll come when it comes" You can listen to whoever you like, but if you haven't seen them in the stores yet.. it's because they're not there.

Q: How much will they sell for?

A: Again.. who knows? The fact a Raider CS-35 can sell for as little as $35.00 AUS to $79.95 AUS in the space of a few months suggests any "RRP" means nothing in Australian dollars, nor can the rest of the world be indicative of the Australian selling price. Every toy store prices differently too.
Posted by Pocket. Esq. at 14:40