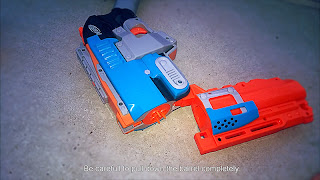 Our German friends at Bankcroft.de have gotten their hands on some of the mad new gear- in this particular case they're reviewing the upcoming new Zombie Strike Sledgefire. I'm quite a fan of this blaster from an aesthetic point of view, but what's nice is Bankcroft really break it down on how it works.

From what the video shows, it 'breaks' in half like the Barrel Break, and is designed to be a "shotgun" so it fires three darts simultaneously (apparently you can't do one at a time but then if you wanted to do that, this wouldn't be the blaster of choice) via a dart holder but luckily it doesn't 'spit' the empty shells out after you've fired like a Buzzbee Doubleshot. 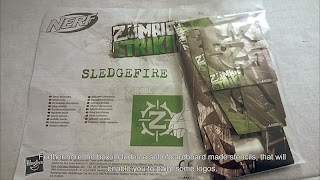 Another thing I find pretty interesting is another "nod" to aesthetic modders by providing cardboard stencils in the box. It seems like Nerf are actually promoting/urging fans to customise their own blasters with the Zombie Strike logo. Nifty!

Vid after the jump. Thanks Cornelius for the link!