The new promo clip for the upcoming Rebelle line of "female friendly" blasters is out, and it's definitely a different approach to Nerf advertising than that in the past. Sure, it's pretty obvious there are a lot of nods to the Hunger Games with the actors running through the forest rather than urban surroundings but there's so much more to this clip that that.

The interesting thing about this clip is because it's now promoting a product that's targeting girls, the message is different. And that's why I find this clip so darn interesting. Because dem marketing peeps over at Hasbro have determined that if you want to appeal to the female market, you can't just throw a mad looking product in their face and expect them to buy. The new Rebelle line seems to not just be about pink blasters; ultimately this is about creating an image or lifestyle.

Which is probably why this clip seems less like a traditional Nerf ad, and more like one for Clearasil daily face wash.

Firstly, let's take a look at the actors- they're clearly young and attractive and they're fully outfitted in what I guess is stylish yet "functional" clothing and look their age of early/mid teens- they could be anywhere between 13- 16, but it's very unlikely they're younger than that. Given Nerf blasters are traditionally for ages 8 and above, we've got a bit of a gap here between those who are 8, and those who are of the same age as the actors themselves. To be honest, most market research would suggest girls in their teens are less likely to want to play with toy blasters than their same age male counterparts, and those that still want to.. well they probably are happy playing with the traditional Nerf blasters anyway. 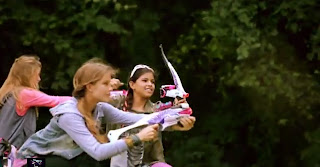 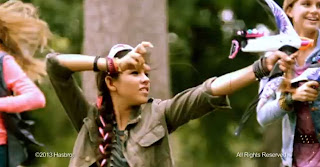 But that's the thing. These actors are not just about appealing to girls their age, they're more about appealing to girls younger than them. It's about an ideal, something to aspire towards and to be as attractive as possible to younger girls as possible. These girls aren't just generic actors who's role is to just hold a Nerf blaster and fade into the background, we're actually supposed to be interested in them. I mean look at them- they each look different and are uniquely dressed. They're deliberately meant to be INDIVIDUAL. These young ladies are basically introduced individually one after the other and each express a different 'attitude'. They have happy and confident poses and speak with conviction. Just like with newsreaders, the camera work is close up and in their faces which commands respect and trust. These girls are speaking to you. This is aspirational stuff right here, and for me they're supposed to represent the young lady any parent would love to have as their daughter, and the big sister anyone under the age of 12 would look up to and want to be like. 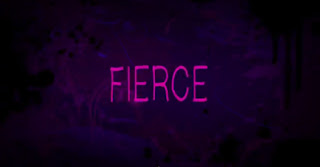 While traditional Nerf ads are mostly about leading with the awesomeness of the blaster itself and then maybe a few non descript dudes who are partial to parkour,  this Rebelle clip seems more about developing a world where these blasters belong. It's about the association of the above ideals and attitudes, maybe the general style and appearance of the actors to be attractive enough and appealing to make young girls think "i want to be like her and have that lifestyle, therefore I want that blaster". Each actor and each attitude is associated with a specific Rebelle blaster; positive reinforcement that this blaster makes you confident, fierce, determined.

Check out this ad for the Nerf Stampede in 2010:


The actors are all very generic looking; dressed the same in black with dark hair. You're not supposed to pay attention to or even care about them- these ads are all about the Stampede itself.  The actors are shot at a distance; the backgrounds are grey and generic and the only thing we're really supposed to care about is the bright yellow Nerf blaster. As far as any character development is concerned, the only thing the guy says is the Nerf slogan 'It's Nerf.. or nothing'. In fact before you revisited this Stampede ad, how many of you really remembered this guy? We kind of don't really care whether this guy is fierce or determine, we just care that he's got a sick Nerf gun in his hand:P

The girls in the Rebelle ad have been carefully cast to portray an image that suggests empowerment while still being 'girlie' per se.  They've shot this video in what looks like a typical Autumn/Fall afternoon. There are no other boys around; this is girls playing their OWN game with their own gear. Sisters are doin' it for themselves? Absolutely. And notice how at the end of the Rebelle clip, they confirm that even though they're individual and unique, they can still come together and be a team; basically suggesting this is a great way to spend time with your friends and working together. 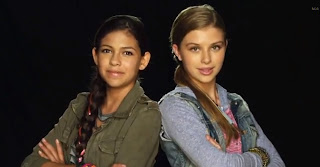 Traditional Nerf ads for "boys" don't give two shakes about that sort of thing. The blasters themselves are cool. What you do with them is your prerogative:)

SO what am I saying here? basically this.. unlike so many other Nerf ads in the past, there's a LOT more emphasis on the actors themselves in this Rebelle clip than just as human stands for the gear. Someone in Nerf land have determined girls need more than just fancy blasters. They need to feel something; be a part of something.  They need to warm to the overall image and lifestyle and relate to those who champion said lifestyle. The way the Rebelle clip is produced, with close ups on their faces reminds me of an ad for an episode of some MTV reality show or some documentary about high school. They're strong, they're fierce, they're determined. Didn't catch that when they said it? That's ok, because they flash the words up on screen for you to absorb this again. We care a helluva lot more than non descript dudes in black skivvys that's for sure:)

The strange thing about this though is.. do you think this sort of advertising would still work for guys too? I have to admit I found the Rebelle clip quite engaging, and that's a big admission from a 30 something dude recognising his mindset is the same as an 11 year old girl:) Don't boys want to be empowered too?

As a final note, before we're so quick to dismiss "that works for girls", it's not the only way marketers appeal to that demographic. A blaster that's pink? Imagine if the Rebelle ad adopted a tone somewhat like the queen of pink- Barbie herself:


I'd buy a Rebelle blaster to shoot myself after listening to that annoying voice, that's for sure!
Posted by Pocket. Esq. at 20:17