Nerf shows up in interesting places- sometimes under different licences (Iron Man and the Incredible Hulk for example). The Spiderman /Venom Dart Tag blasters are one of the most unique looking Nerf blasters I've ever seen. I picked up a pair of these on recommendation from a fellow Nerf collector (thanks Jay) and it's a wonder they never really took off, because they make for a pretty good supplementary blaster..

The box says this dart tag set is "powered by Nerf" and it's true- Other than the colour schemes this is all Nerf. The pack comes with two dart taggers , two dart tag vests, two spare ammo holders, dart tag glasses and six dart tag darts for each tagger. 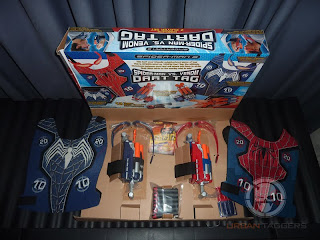 Rather than the traditional orange and green colour schemes of Nerf's other dart tag blasters, this is a Spiderman licenced product so they're coloured accordingly; red + blue for Spiderman and Black/Purple for Venom.
Ok, what makes these dart tag blasters different is rather than just repainting a Stormfire or Strikefire and CALLING it a Spiderman blaster, Nerf have opted to design something completely new. These blasters, in true Spidey form, shoot from the wrist. No gun resemblance here folks, this one's all in the wrist (and fingertips).
This IS an area where they're obviously aiming more towards children, as I had trouble fitting the straps around my wrist comfortably at first. Still once they're on, they're quite secure and you're ready to go. 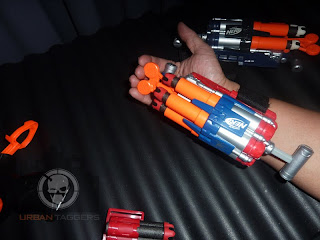 The Spiderman/Venom dart tag blasters are air pressured, similar to the Nerf Magstrike. A small lever pump juts out from the back of the wrist blaster, and you need to pump it up a good 15-20 times to get it primed and ready to go. Once it's already on your wrist, this isn't that comfortable or easy to do, and it raises eyebrows with those watching. :) 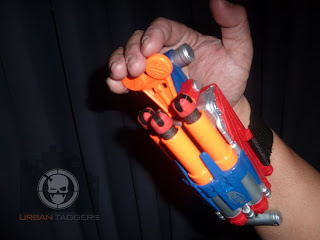 The lever that sticks out at the front is where you do your firing. A gentle push will punch out one single dart, whereas a full pull will send away all three darts at the same time. Three darts at a time or one after the other? Not bad. It also allows for your hand to be free, so you can with a bit of practice hold another blaster in your hand at the same time. Which is pretty cool. 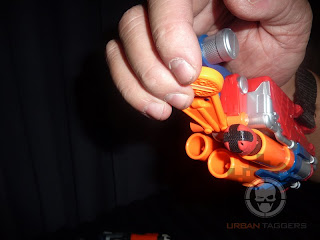 For dart collectors, the Spiderman/Venom dart tag set is a must, because it does come with limited colour scheme darts which in my opinion look very cool. Not available anywhere else or individually, they're schmicka de schmicka:)

This set performed a LOT better than I thought they would, but having said that, still disappointed a lil at the same time. Personally, air pressure blasters are always a lil touch and go in my opinion (Magstrike- good. Hornet.. not so good) and while these blasters have got good range and accuracy, they still are a lil cumbersome to wield (I mean come on, they're on your wrist!). For originality though, they're great, AND with the right amount of practice, I reckon they'd be a great addition to your Nerf arsenal. I thought they'd be a lil dorky to be honest, but they don't look half bad and given they're so hard to come by (and when you do find them they're not that dear!) I'd recommend them.
The Spiderman/Venom dart tag set go for around 35-45 dollars AUS from toy stores but given they were to come out with the Spiderman 3 movie release, they're probably hard to come by. I bought mine from dealsdirect.com.au- otherwise good ol' ebay.
Usability: 6.5/10
Out of the box performance: 7.5/10
Cool factor: 7/10
Price point: 7/10