Well, Winter has FINALLY left us here in Australia for another year, and we're starting to warm up which traditionally would mean WATER FIGHTS!!!! Albeit.. due to stage 3 water restrictions on the east coast, it does mean very controlled, small bursts of water, water fights!:)

I'm heading up to Darwin over the weekend, where 1) there are no water restrictions, and 2) it's 34 degrees up there in SPRING (to you Americans, that's near 95 degrees F) and so I figured I would do a review.. on a water blaster. I present to you, the Nerf Super Soaker Rattler.

The Super Soaker Rattler is part of Nerf's first release under the Super Soaker label, along with the bigger Shot Blast and the smaller Bottle Blitz. They come in two varieties- red and blue- and it's the blue one I'm writing about today. 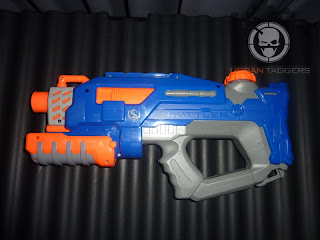 The Rattler is a relativelty compact mid sized blaster that uses the more traditional "syringe" pump action style firing mechanism- there's no trigger, it's simply a matter of push the pump forward and pull back to let off a steady stream of water.
Aesthetically, the Rattler (as with all of the new Nerf Super Soaker range) looks awesome. It's solid and futuristic, and it uses the similar colour schemes to the Nerf N-Strike Raider + Longstrike. The blaster comes with tactical rails so you can attach any N-Strike scopes and other bits- but as with my Shot Blast, I generally don't bother. We're working with water, and most of my water fights don't require stealth pinpoint accuracy, more hilarious "splash" factor, accompanied by some serious high-tailing:)
Build-wise the Rattler is quite well built, though another beef I have with the new Super Soaker line is they've taken away the quick fill mechanism of the older blasters. You now have to go back to unscrewing the lid and filling them up under a tap, rather than the vacuum seal lids of the Flashfloods (that was springloaded so you could merely push it up against the tap, and then release) . 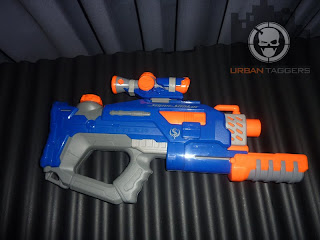 Performance is a mixed bag- the pump is quite short and stiff, something NOT easy for young kids to use.  Syringe style pump action water guns really really suck for little kids. You watch them stand there, struggling to get their little hands around the end of the pump, and they struggle to get rapid fire compared to their friends with easier to use triggers (and..buckets for that matter). The Rattler is no different- and because the pump is so short, you don't ever FEEL like you've accomplished a satisfying shot, it always feels a little awkward to pump back and forth. To be honest  I've never been a fan of pump action water blasters and the Rattler doesn't do anything to change my mind. Tank capacity isn't that great either, you'll go through it pretty quickly with full stroke shots. 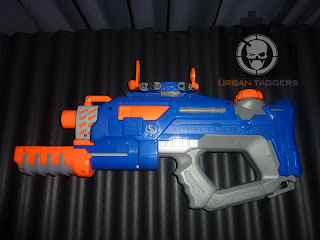 On the plus side, it's range is really good; they're dead easy to understand how to use and difficult to break, so it means you can bring them to a poolside or park and not worry that your friend's kid isn't going to somehow manage to bust it (while keeping your Flash Floods and CPS's to yourself)
The Super Soaker Rattler looks great and will do well for Summer, but it's selling itself on looking very cool and being a part of the Nerf banner rather than being anything exciting.  It's pump action mechanism and traditional screw open lid slows it down and its low capacity tank means it's going to run out pretty quickly on the playing field. 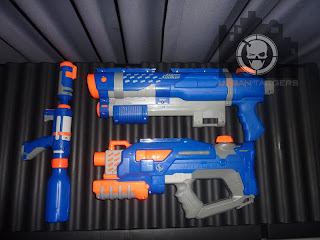 If you can get them cheap, sure why not? It's water blaster! But as for WHY you're buying it over a cheaper brand- other than aesthetics- there's not much else going for it.
They're available now in Australia from most toy stores- between 25 and 40 dollars AUS.
Usability: 6.5/10
Out of the box performance: 6.5/10
Cool factor: 6/10
Price point: 7/10 (mine was 25 dollars which was reasonable)
Posted by Pocket. Esq. at 15:15