Light Strike: A pistol you say? 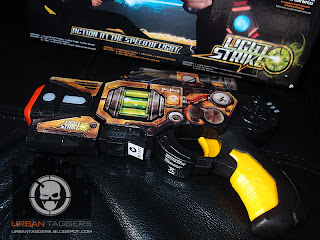 After our pretty lengthy review on the Light Strike system, you'd think you now know everything there is to know about these new laser tag blasters from Wow Wee. Well there's just a little bit more; we picked up a pistol today (the yellow SP 144 that basically matches my fav rifle) and we've now learnt just that little bit more about the new laser tag system on the block... :) 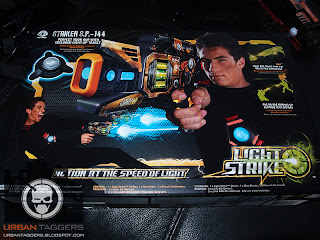 The pistols, or "Strikers" as they are called in Light Strike speak, are smaller, handheld taggers that we originally thought were just detuned versions of the assault rifles. Much of this is true- the main differences features wise is:
-unlimited ammo. There is no reload button, so you just fire away to your heart's content. There is a small pause that represents "over heating" when you're particularly trigger happy for a long period of time; after the pause you're back to full ammo again and off you go:)
-no finger print sensor..or any touch sensitive buttons. The pistols don't have any of the side touch sensitive buttons as found on the assault strikers- in fact, all the side artwork design buttons are just for show on these taggers. Instead, there are four physical buttons on top of the blaster that you can select from.
-no semi automatic toggle. It just comes with standard single fire mode (or hold the trigger down for..er.. auto mode?)
-no room for attachments. You can't attach any of the additional weapons and accessories on these pistols.
-no "rail strike". The pistols have only 4 inbuilt weapons compared to the assault rifle's 5. 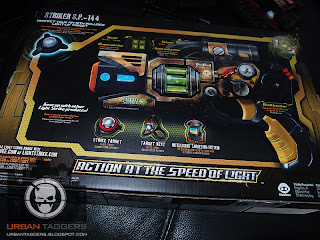 So what DO you get? Well, in the very nice shiny box, comes with a pistol, a "mini" target and an instruction manual. Which is always advisable to read. 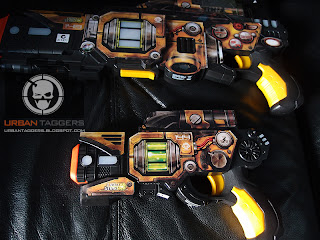 The pistols come in the three different designs just like their assault rifle big brothers. Functionality-wise though, they're identical, and you can use any one with any coloured team, so it'll just depend on which one suits you best; the grips are a little smaller than the rifles though so again it will be a slight issue for those with big hands. They still feature the same associated voices as the rifles so in my case, since I picked up the SP 144 I'm greeted by my monotone robotic assistant:) 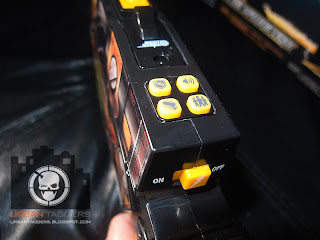 Instead of the touch sensitive buttons on the side, the pistols use four physical rubber buttons in a square grid formation. I found this actually to be a lot easier to use; powering the blaster up is as easy as using the on-off switch and other than selecting teams, you're almost ready to go. The pistol lets off a unique intro sound different to the rifles, but does not require any fake finger print scan. This simplicity is really quite appealing, and appeals to young children and casual players alike. The four buttons are the shield button, the weapons toggle, the team selection and the volume control. Just as with the assault rifles, it's a matter of pressing the button down and scrolling through the menu till you hear your chosen selection. It's quite intuitive to be honest, which I found lacking in the rifles.

The functionality to pair the blaster to the optional (although somewhat required if you REALLY wanna play properly) target vests is the same as with the rifles- select your team colour and press the shield and team colour buttons simultaneously while shooting the shoulder sensor by squeezing your trigger at the same time. This is fiddly stuff, and surprisingly, the pistol's physical buttons actually make it easier to do than with the rifle. 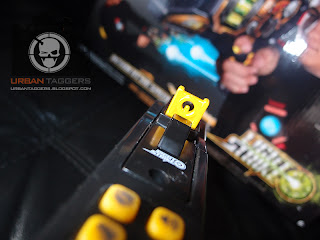 Each pistol of course has its own aesthetic design elements  in shape and with differing "love it or hate it" sticker details on the sides. Because the pistols are much smaller, I find the flat stuck on look was not as obvious and didn't look as bad as they do on the rifles. 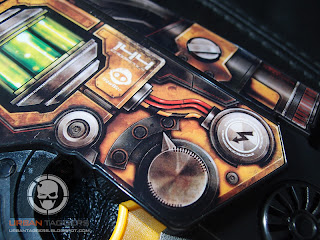 In this case though, the artwork on the stickers are purely cosmetic. No touch sensitive buttons here (I was half hoping there'd be some easter egg here but nope.. pressing plastic amounts to silence and a red fingertip) but this actually didn't bother me. 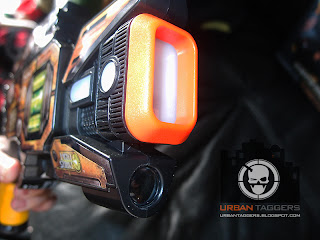 The tagger sports a similar appearance to their rifle counterparts right down to their light emitters/receivers. I don't THINK the size of them affects anything to do with range and accuracy. and we haven't experienced any differences in ranges thus far. 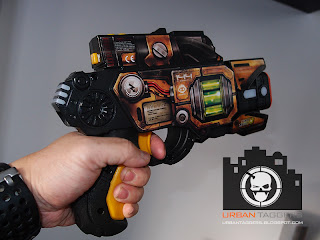 In hand, they actually feel pretty good. Very light weight, though still using four AA batteries, they felt better weighted than the rifles. For small child hands , there's still room for two handed grip, but anyone could hold one with one hand easily...
This of course lends itself to the question we've been pondering for a while- can you DUAL wield? On the boxes, the kids are all holding TWO pistols in hand, so it suggests you should be able to although there is NO mention of it in either the pistol OR the vest manuals. Physically there's no connection between the vest and the guns so therefore when you 'pair' the vest it actually turns off the life counter on the gun and sets the vest colour and puts the gun into 'paired' mode slightly changing the function of the shield; revive functions to send IR to the vest instead of activating on the gun.
The thing is, if you try pairing more than one blaster with the target vest, it just doesn't seem to work; our constant testing ended up having one blaster drop out, or none pair up; in any case we haven't been able to get it to work.  In a way, you CAN do it.. but it's not quite what we were expecting.  So in the case of pairing two guns, simply point one gun at your vest and pair to set the colour then pair another gun (whether pointing at your vest or not) and it will feel behave like dual paired guns however, when your vest dies your gun will stay alive.  So... realistically there's nothing stopping you from carrying two pistols, but you'd essentially be playing as two people/health packs so it's not entirely the same. (like playing House of the Dead on your own at the arcades during happy hr) 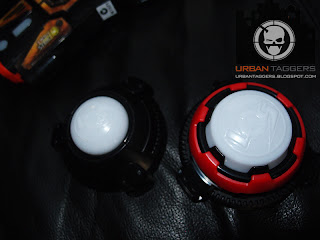 The pistols come with a "mini target" which is essentially a practice target that has a smaller dome and no speaker/sounds to come out of it. It behaves the same way as the practice targets though; switch it on and the colours change as per whoever shot it last. 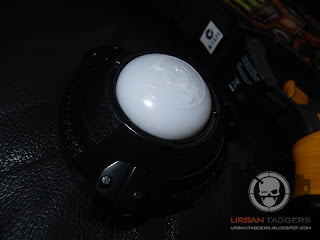 As far as playability is concerned, I actually found I ALMOST preferred the pistols to the rifles. Quicker to start up, quicker to play, more intuitive use of menus and less "stuff" to worry about meant for a much quicker, faster game. Other than nearly busting my shoulder sensor when I did a John Woo commando roll, the pistol tends to be much easier to wield; I don't need the rail strike weapon, and the unlimited ammo just made the whole system easier to use. Sure there's still no tactile feedback, but for some reason it seemed less of a problem with the pistols.

While the pistols have less of the fun stuff like mad crazy attachments and more realistic functionality (ie the reload button), it makes it simpler to adopt and get right into. I had no problems with little kids using the pistols, and being small it lent itself better for office warfare. I DO like the scope and machine gun attachments for the rifles, so it might just end up having to want to use both:)

The big down side to the pistols, is really.. the price. Target's shelf price AUS was 59.95 for one compared to the 79.95 of the rifles. Both are pretty exi compared to US prices, but the big thing about these is you can't just have one; regardless if you're hoping your best mates will get them too (and maybe you can start your own crew and have matching jackets and a secret handshake) its just not any fun having just one. Plus the vests.. I'm still unsure if parents are going to think this is a good investment when half the kids who've picked it up have no clue what laser tag is anyway!

It's a good way to get started into the Light Strike world, but not THAT much cheaper than getting a rifle and in turn all of the attachments. It's worth getting a pistol anyway if you're ever wanting to go up against kids or casual gamers. It's definitely made us think more about Light Strike as a whole system..  I think it's time you all go out and get some of this gear now and let me know what you think:)
Posted by Pocket. Esq. at 17:27