Max Force Crossbow 65: Packs a punch..if you can hit them:P 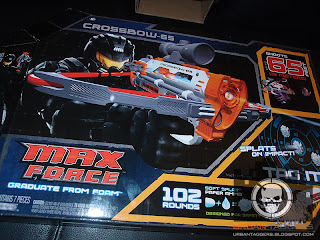 We picked up a Max Force Crossbow 65 during the Target big toy sale; I've been toying (haha) with the idea for a while, and the savings were worth the purchase. the Crossbow basically looks like a beefed up version of the Max Force Maximizer; basically the same other than the crossbow bar attachment which gives it more stretch at thus gives it the proposed 65feet distances (vs the Maximizer's 60). I don't actually own a Maximizer, but from using a friend's, I'd suggest the main unit is pretty much identical.  (I never was a fan of the name 'Maximizer'.. it makes me think of weird pumping devices..!!!)
It's got some serious punch on it, and I'm loving the ranges.. I just have trouble actually HITTING my target.. 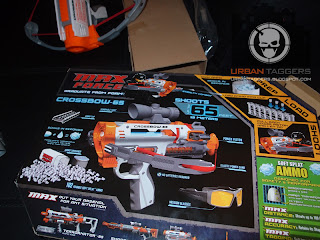 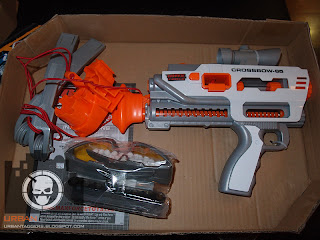 The Crossbow 65 comes with the main unit, the 3 pieces that form the cross bar, the standard Max Force eye wear and the ammo clip, ammo container and splat pellets. (Yup.. the 'spit wads'). Packaging as always looks sweet, but they've gone back to plastic ties to hold the blaster together so I needed a knife to get the blaster out. 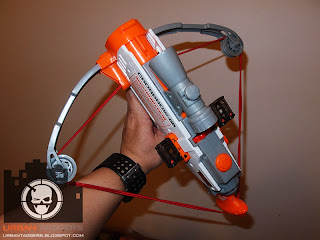 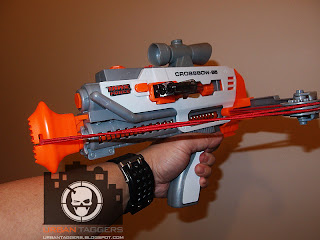 Assembling it isn't too difficult, but it was a bit of a pain lining up the strings to the wheels and onto the.. "Power Piston" (are you serious?!! Jakks what are you thinking with these names!!!). The string is elastic, which gives it that extra bit of kick. As always, these blasters don't have triggers so there is a trigger guard but it's just for aesthetics and perhaps comfort. 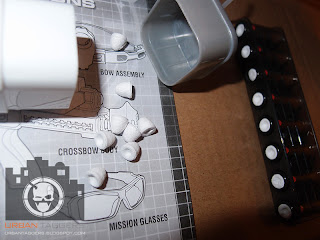 As always it's a matter of loading the pellets into the clip and then soaking it under water for a few seconds. This wets the pellets, making them expand, go soft and basically results in them making a pretty decent seal. 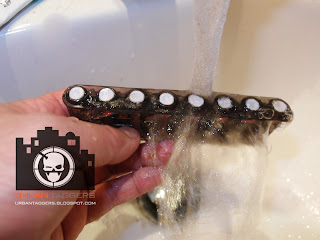 Loading the clip into the Crossbow is similar to that of the Shadowhawk- there's a little wheel on the top to advance it, but it quite easily just pushes in and stays in place. Every time you pull back the 'Power Piston" it advances the clip by one. 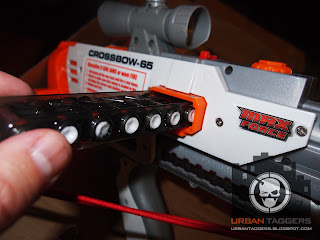 To fire the Crossbow, it's a matter of pulling back on the "Power Piston" and releasing it, making the motion feel more like a slingshot than that of a real crossbow. With arrows. (and perhaps a falcon? hehe)
It's got quite the incredible spring on it and requires quite a firm grip to pull back; something I can imaging smaller children would have an issue with. In hand the blaster is quite solid and feels very good to hold, and actually does feel pretty impressive when you pull the piston all the way back; there's quite a lot of force there. Max force even. (bahahaahaha.. ahem)
Distances are as always with the Max Force gear-fantastic, and the satisfying splat is always fun, if not a bit of a mess to clean up afterwards:) 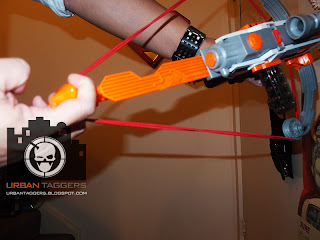 The issue I had with this though, is because it is such a rigid mechanism, unless your grip around the blaster is really firm and you've got great Popeye style forearm muscles, the blaster just "jerks" and it's very difficult to maintain good aim. With practice you do get better, but I still ended up missing the mark several times because of this pull back slingshot style firing mechanism. 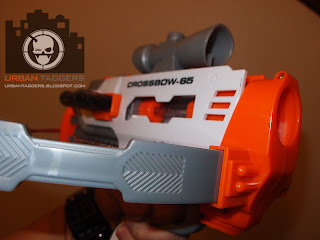 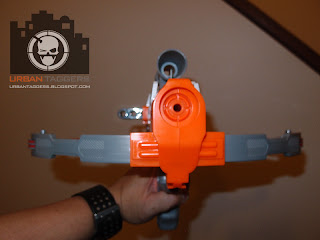 The Crossbow comes with a detachable scope that slides on its rails and is compatible with the other Max Force scopes.. and Nerf N-Strike gear as well while we're at it. Of course the scope on this blaster is next to useless; you can line your shot up and get ready to fire, but once you do there's not much of a chance you'll have the accuracy to hit the mark (unless perhaps you bolt the Crossbow into a vice or something!).
We've been going on about the triggers for a while, but with this blaster particularly, having some sort of catch to hold the piston and then release with a trigger would just be awesome. AND you'd have accuracy. Which would totally win. :) 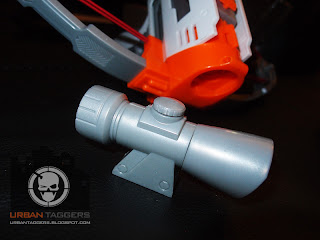 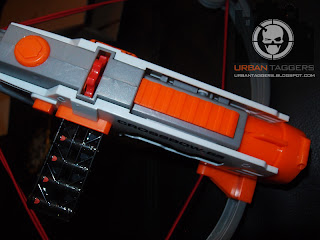 The other issue I'm having with the Max Force line is the pellets shoot so fast you really can't see them fire; the only evidence of your shot is the missing pellet from your clip as it advances and the "splat" wad against the wall (or the angry opponent's face). I was thinking it would be a cool idea to develop coloured pellets, assuming it had non staining ink.. or maybe staining ink would be cool.. hmmmm... :)  By doing so you'd have better visibility with your pellet, and perhaps watch your shot connect. 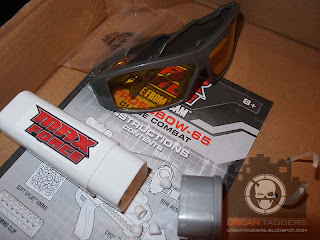 Normally the Crossbow is quite a bit more than the Maximizer, and at full price I'd possibly suggest it not worth it to go up to the Crossbow for such a minimal range increase. However during sale time they were the same price, and the Crossbow looks cooler with its..well Crossbow look:P (It's also not called "Maximizer" which I think is a good thing!)

I'm a fan, and for 29 bucks during sale time I'd suggest it's a definite buy if you're wanting to give the Max Force line a go but still a tad unsure to go up to the Terrornator or Shadowhawk. The Crossbow 65 looks great, has very decent ranges and is a whole lot of fun; I just think there are times where a trigger really makes the difference from very cool, to absolute awesomeness. Hope you're listening Jakks Pacific:)
Posted by Pocket. Esq. at 18:43