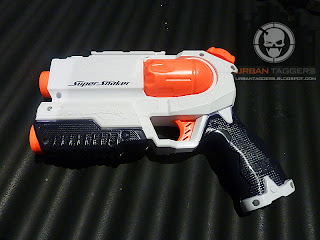 The new Super Soaker 2011 line was at rumour stage only a few weeks ago, so we were very pleased to find some of the new blasters available here in Australia already; it makes sense given Christmas is celebrated in the Summer down under, and what better way to celebrate than to give your nearest and dearest an absolute drenching:) The new Super Soaker Point Break is a return to the air pressure mechanism while featuring all new designs (as opposed to repaints which has occurred over the past few years) 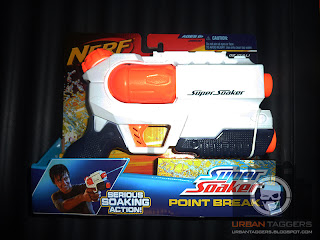 The Point Break comes in an open style packaging secured by paper string. It's relatively compact and the first thing I would notice about this blaster is how refreshing it is for Hasbro to release a Super Soaker that actually looks.. nice. The new white blue and orange colour schemes are very schmick, and it actually has a nice solid 'gun' form rather than the strange looking designs of years past.
Water is filled up by using the screw top at the rear of the blaster. I find it curious why the new blasters opt for this more traditional cap and no longer use the speedloading quick refill mechanisms(which were springloaded so you could easily push it up against a tap and fill very quickly) from several years ago. The orange "barrel" is pretty much aesthetic.. but it serves it's purpose of adding colour:)

The Point Break's nozzle is small,but still allows for a firm stream when fired. The stream is very steady and probably goes about 5 metres, which when talking about water fights, is about normal.
The Point Break uses an air pressure pump located at the bottom of the blaster's muzzle. It slides back and forth, and while the packaging suggests 15 pumps, you could easily get it up to 30 without any worries. It's a very smooth action and I prefer it to the 'wand' style where you can feel like any over zealous pumping could snap the shaft in two.. 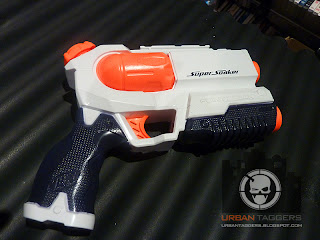 Being so compact means water capacity IS quite limited. You'd be severely outclassed if you were to rely on the Point Break as your primary blaster in any water battle. It's much more effective as a secondary weapon or as a "shoot and run" style game like assassin (or just a single shot to the girlfriend's head for funsies) Accuracy isn't bad, but not fantastic; water blasters tend to always be a little off centre and in this case, a little to the right so it will require some form of manual compensation.
The Point break feels great in hand; it's well weighted and doesn't leak a great deal compared to other blasters. It's styling means there is a tendancy to want to hold it sideways, gangsta style:)

The Point Break also sports the tactical rails to be compatible with N-Strike Nerf accessories. It's more for aesthetics more than anything else as there's not a whole lot of good any accessories would really do in a water battle:)
Overall, we really like the Point Break; it looks fantastic, feels solid in hand and is definitely a step in the right direction to bring Super Soaker back as a real water blaster contender. Ranges aren't fantastic against some other higher capacity warter blasters, but water battles are generally close quarters and what the Point Break CAN do is pretty decent for what it is. It's also incredibly cheap- I picked mine up for under 12 dollars AUS, which is fantastic!
So far, only spotted in Target AUS but will update as I see more.
Usability: 7/10
Out of the box performance: 6/10
Cool factor: 7.5/10
Price point: 8.5/10
Posted by Pocket. Esq. at 13:45