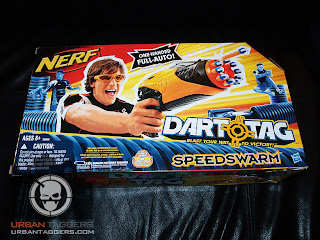 Intel on this blaster also came out of nowhere; we learnt of a 10 round "mini" Swarmfire, then we found out it's apparent official name, and then we saw some "not final" box art. All in a few weeks:) Well, all of what was speculated about the blaster by you all is true- we at UT have managed to get ourselves a brand spankin' new Speed Swarm in box. It's niiiiiice.:) 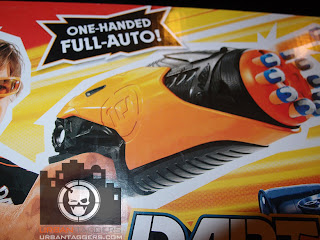 The Swarmfire was a pretty popular blaster when it was released and was pretty much the poster child of the revitalised Nerf Dart Tag line. The issue for many was it's size and weight- loved the full auto nature of the blaster, just found it sort of unwieldy for those who'd want to use it with one hand, or even better, dual wield two of them. The new Speed Swarm does this and does it pretty well:) It maintains the rounded Bumblbee/whale rounded shape of the Swarmfire but in a more portable hand held size. 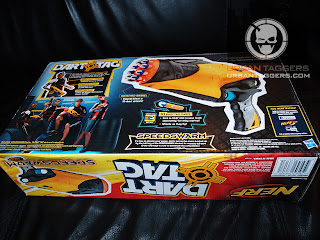 Box design and art is very similar to all of the other Dart Tag blasters in the 2011 range, with the cut off corner styling. 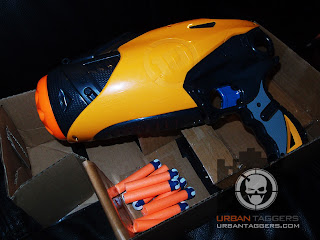 Inside the box you get the Speed Swarm, 10 blue dart tag darts and a manual. Batteries alas are not included- you'll need to get yourself a 6 pack of AA's for that. This straight away reduces the weight of the blaster compared to the 6 C cells required for the Swarmfire; batteries like the Swarmfire are stored in the undercarriage of the Speed Swarm. 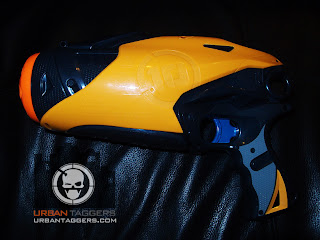 The Speed Swarm, unlike the Swarmfire does not have an on/off switch- it's permanently "on" and all it requires is a squeeze of the trigger to fire rounds immediately. There are no safeties or required darts to operate; as long as there are batteries, you can shoot till your rounds run out. 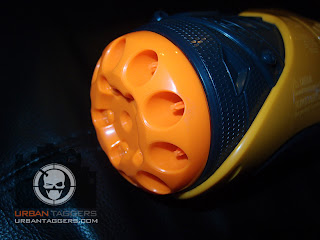 The barrel is very much like the Swarmfire only smaller. 10 rounds isn't bad; it's up there with the traditional Dart Tag blasters in the Hyperfire and Fury fire. The barrel rotates as you squeeze the trigger. 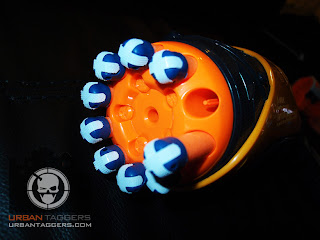 I'm not sure why they chose to make the trigger blue, but it does stand out from the rest of the Dart Tag blasters.  Hand grip is quite large and comfortable to hold. 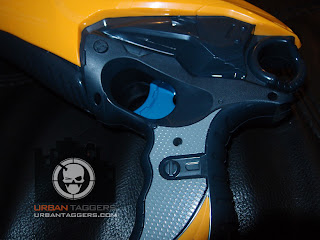 The Speed Swarm has a sizable loop at the back which I guess you can tie a.. ribbon through?:P There's also an eyelet in the handgrip so as to make for a more practical use of the loops as a shoulder strap:) 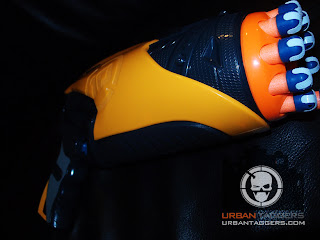 Performance wise, the Speed Swarm is pretty decent in ranges with similar distances to the Swarmfire, but personally I found it quite slow; this could be due to the batteries I was using, or just an unreasonable expectation but I'd prefer it to be quicker which is something a voltage mod could probably fix. I also find these blasters don't actually make for good single shot hand blasters- the "wind down" on firing and the "wind up" to get things going are not the best for when you want to land a nice single shot into your opponent. It's definitely where non powered plunger blasters come into their own. 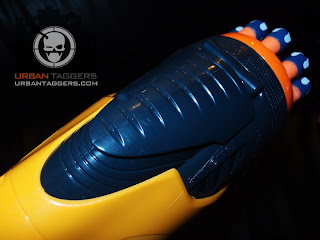 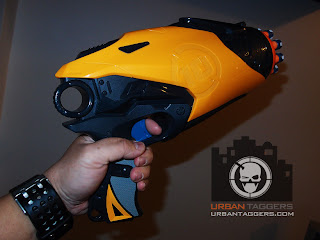 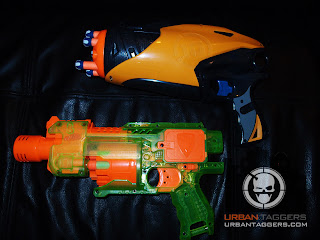 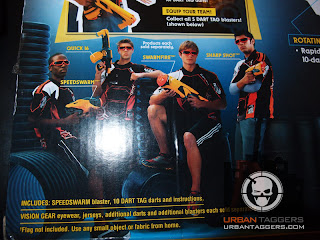 What's interesting is in the packaging, the Speed Swarm seems to have taken the place of the Speedload 6 although my personal belief is there doesn't need to be another fully automatic blaster in the Dart Tag line. It's probably cool for dual wielders, but then that does take away the free hand required to capture any flags you're supposed to nail.

The Speed Swarm is a cool "little" blaster but in a sense it's a tad underwhelming given it doesn't really bring anything else to the table that the Swarmfire didn't do before it other than to be a tad smaller. It'll have it's fans and I think it's still some very cool kit;  I guess I was hoping for more design innovation.

Hopefully this will be out sometime during the holiday season.. especially given my review unit was final and in box.
Posted by Pocket. Esq. at 23:19