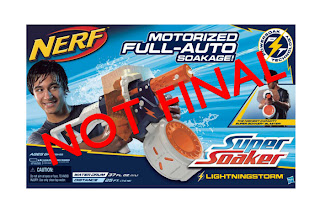 You can't say Nerf ever rest on their laurels of success; browsing German store tsbz.de came up with an image of "Not Final" Box art for a new Super Soaker blaster called the Lightning Storm.

From what we can tell, it uses a 1 litre water drum (that we'd have to assume is compatible with the other clip system blasters like the Thunderstorm and Tornado Strike) and claims to be the highest capacity Super Soaker blaster (well.. highest capacity of the CURRENT range). I'm guessing the 'Powersoak Technology' and the fact it takes 4 batteries suggests it's another motorised blaster. And it has a shield that actually looks like it'll be able to fit on tactical rail compatible blasters properly, unlike the weird styling of the Hydro Cannon's.

More as we know it:)